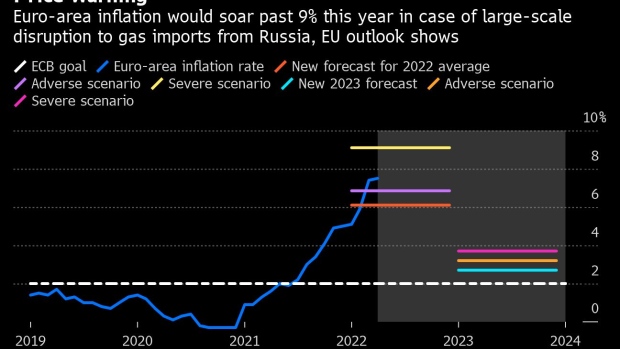 The Netherlands governor, one of the ECB’s most hawkish policy makers, told Dutch television that he supports a quarter-point increase in July already mooted by several of his colleagues, but then added that a larger magnitude shouldn’t be excluded if necessary.

The euro extended its rally, trading 0.8% higher at $1.0517 on Knot’s comments. Money markets are pricing in 105 basis points of tightening by December, according to swaps linked to ECB decision dates.

The comments open a new line of argument on monetary policy at a time when the ECB’s resolve toward stimulus withdrawal is galvanizing fast. While the US Federal Reserve just delivered a half-point move in April, euro-zone officials have been more cautious at a time when war is raging next-door to their currency area.

“The first interest-rate hike is now being priced in for the monetary-policy meeting of July 21, and that seems realistic to me,” Knot said. “Based on current knowledge, my preference would be to raise our policy rate by a quarter of a percentage point. Unless new incoming data in the next few months suggests that inflation is broadening further or accumulating. If that’s the case, a bigger increase must not be excluded either.”

Asked about the extent of such a move, Knot said that “in that case, a logical next step would amount to half a percentage point.”

Inflation, which is running at 7.5% in the euro zone -- almost four times the ECB’s target -- is the driving force, despite the war in Ukraine weighing on the continent’s pandemic recovery and prompting to some officials to warn of stagflation.

The risks facing the region were laid out starkly on Monday by the European Commission, which cut its growth forecast and raised its inflation outlook, adding that in a “severe” scenario of a total Russian gas supply shutoff, the economy would barely expand.

Knot said that while he doesn’t currently envisage a global recession, people will still face higher inflation in the next few months, and normalizing monetary policy is “the only option.”

The momentum building among toward a rate hike has already gone beyond the first move in July, with policy makers increasingly embracing a scenario of taking interest rates above zero before the end of the year, according to officials familiar with the matter.