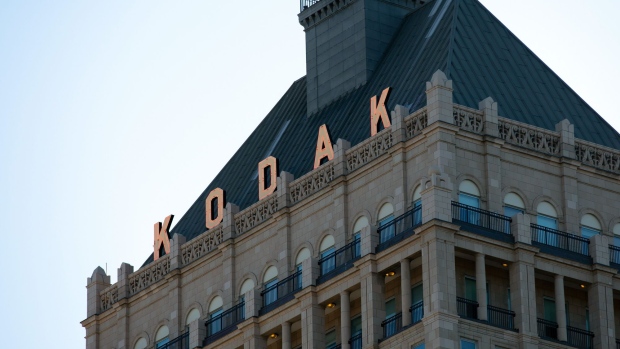 Eastman Kodak Co. shares plunged Monday after a federal agency announced it was suspending a US$765 million loan to help the former film company produce Covid-19 drugs, pending the outcome of investigations into potential wrongdoing.

The International Development Finance Corporation said in a tweet Friday night that “recent allegations of wrongdoing raise serious concerns. We will not proceed any further unless these allegations are cleared.” Congress and the U.S. Securities and Exchange Commission are investigating the deal, and Kodak’s board said Friday it’s also opening a review of the loan disclosure.

The stock tumbled as much as 43 per cent before being briefly suspended due to excessive volatility. It was down 30 per cent to US$10.42 at 9:57 a.m. in New York. Kodak has seen extreme moves in its share price since the development bank loan was officially announced July 28. The SEC is looking into whether the company broke the law by telling some news outlets about the planned loan before informing investors, a person familiar with the matter has said. The regulator is also looking into stock awards granted by Kodak.

The Rochester, New York-based company’s stock jumped 25 per cent on July 27 when local media reported the deal was in the works and continued soaring after the formal announcement a day later. Kodak shares have surged to as high as US$33.20 from US$2.10 before news of the loan leaked.

The development bank loan was the first of its kind under the Defense Production Act in collaboration with the U.S. Department of Defense. It was intended to speed production of drugs in short supply and those considered critical to treat Covid-19. The loan was pitched by the Trump administration and others as a way to rebuild America’s pharmaceutical manufacturing infrastructure while restoring the once iconic photography brand.

House Democrats have questioned why the Development Finance Corp. would “support Kodak, an organization that was on the brink of failure in 2012 and was unsuccessful in its previous foray into pharmaceutical manufacturing.” The Democrats are seeking all communications about the loan from the DFC.

Democratic Representative Jim Clyburn said in a statement Monday that he was “pleased” the Trump administration had put the loan on hold. “Now, we need answers about why they planned to give a taxpayer-funded loan to manufacture drug ingredients to a company without pharmaceutical experience, and how Kodak executives acquired millions of dollars worth of stock and options at the same time they were negotiating this loan in secret,” said Clyburn, who chairs the select subcommittee on the coronavirus crisis.

“Given that the administration admitted there are ‘serious concerns’ with the loan and said they ‘will not proceed any further unless these allegations are cleared,’ I expect both the administration and the company will fully comply with the committees’ document requests without delay,” he said.