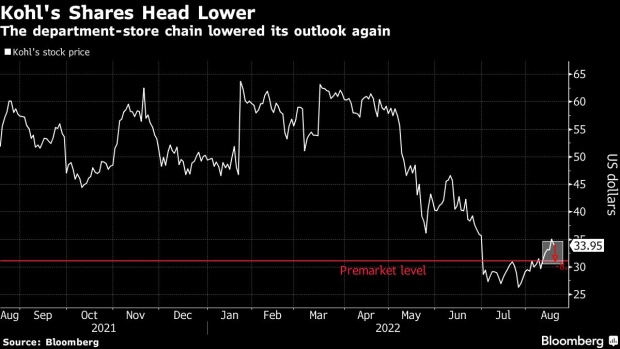 The department-store chain now expects earnings per share, excluding some items, in the range of $2.80 to $3.20. Kohl’s had already cut its forecast in May, telling investors to expect $6.45 to $6.85.

Net sales for the year are projected to decline 5% to 6%, Kohl’s said in a statement Thursday, down from an already lowered outlook of flat to up 1% this year.

Kohl’s is struggling as inflation elevates its costs and puts pressure on consumer budgets, though sales growth had been hard to come by even before the macroeconomic environment deteriorated. On Thursday, the retailer said that middle-income shoppers had become more price-conscious, with some spending less per transaction, making fewer trips and shifting toward value brands.

“We have adjusted our plans, implementing actions to reduce inventory and lower expenses to account for a softer demand outlook,” Chief Executive Officer Michelle Gass said in a statement.

Kohl’s shares fell as much as 10% in New York trading. The stock had already declined 31% this year through Wednesday.

Inventories in the quarter ended July 30 rose 48% from a year ago because of lower sales and other factors, including investments to support the opening of 400 Sephora shops at Kohl’s locations in 2022. The retailer has leaned on the LVMH-owned beauty company to drive sales and attract new customers. Excluding the additional items, inventories increased 27%.

Not everyone is persuaded that inflation is at fault. The main sources of Kohl’s woes are internal, said Neil Saunders, a US-based analyst at consulting company GlobalData Plc.

“The company has lost the plot in terms of merchandising and range planning and appears to be taking a seemingly random approach to buying,” Saunders said in an email.

The closely watched metric of same-store sales fell 7.7%. Analysts were looking for a 7.4% decline, according to the average of five estimates compiled by Bloomberg.

Kohl’s has faced intense activist pressure to sell itself after a long stretch of flagging sales. The board recently took the company off the market after it failed to agree on a potential $8 billion deal, only two months after fending off an attempt by investor Macellum Capital Management to overhaul the board.

On Thursday, the retailer said it entered into a $500 million accelerated share repurchase agreement. Saunders said the funds should instead be invested in revitalizing stores.

(Updates with shares in sixth paragraph.)