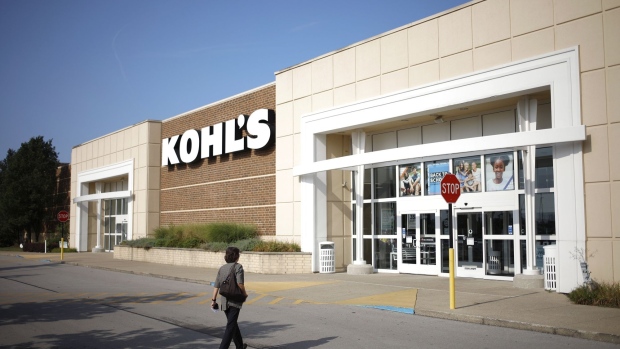 Kohl’s Corp. rose after saying it’s in exclusive talks about a potential US$8 billion takeover deal from Franchise Group Inc., the owner of Pet Supplies Plus and The Vitamin Shoppe.

The companies said Monday that they’ve entered into three weeks of exclusive negotiations to discuss Franchise Group’s offer to buy Kohl’s for US$60 a share. The retailer rejected a higher offer earlier this year, but Kohl’s stock has slumped in the last few months and continues to trade well below its recent peak. Last month, it slashed its profit and sales outlook for the year.

“It’s a disappointment because we know that Kohl’s had potentially opportunities to sell it for higher than what’s being offered now,” Morningstar analyst David Swartz said. “But those opportunities are probably gone now, and there’s no guarantee that they’ll come back.” 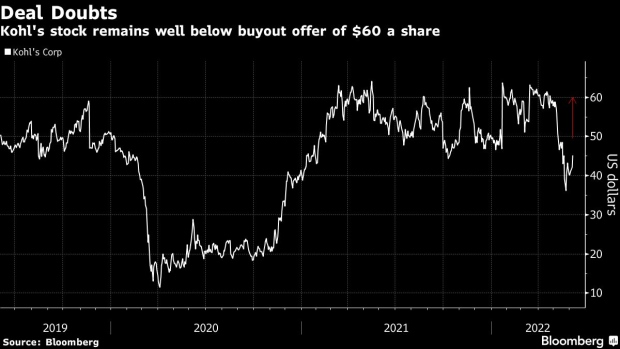 Shares of the Menomonee Falls, Wisconsin-based retailer rose 8.3 per cent to US$45.61 at 2:26 p.m. in New York. The stock is down almost 30 per cent from its January high. Franchise Group, meanwhile, rose as much as 15 per cent on Tuesday.

It’s been a tumultuous year for Kohl’s shareholders. Both Sycamore Partners and a suitor backed by hedge fund Starboard Value LP had engaged with Kohl’s about a potential deal amid activist investor pressure to sell, Bloomberg News reported. While it was unclear how much Sycamore was willing to pay, Acacia Research Corp., the Starboard-backed suitor, had offered US$64 a share, or about US$9 billion.

After rejecting the offers as too low, Kohl’s authorized financial adviser Goldman Sachs Group Inc. to engage with select bidders. Then in May, the company fended off an attempt by activist investor Macellum Capital Management to overhaul the board, which some analysts said lowered the chances of a deal.

Kohl’s has been an attractive target for suitors because of its real estate portfolio. Its stores are mainly located outside of shopping malls, giving it an advantage over other department-store chains as mall foot traffic wanes.

The three-week exclusivity period will give Franchise Group time to complete due diligence and financing arrangements. The Delaware, Ohio-based company intends to contribute about US$1 billion in capital to a potential transaction, which will be funded through a corresponding increase in its secured debt facilities. Most of the financing is expected to be provided on the basis of Kohl’s real estate assets.

A marriage of the two publicly traded companies would be an intriguing match. Franchise Group, with a market value of about US$1.6 billion, would be acquiring a much bigger company if the transaction proceeds. As its name indicates, the company operates franchised businesses, which isn’t the business model at Kohl’s.

The retailer would also be a new foray into apparel for Franchise Group, though it does have brands that sell furniture, mattresses and appliances. One of those companies, American Freight, combined with Sears Outlet in 2020.

“It was just a few months ago that the board dismissed offers without even any due diligence period or anything,” said Swartz, who has a buy rating on the shares. “And now they apparently are willing to consider this offer from this obscure, weird company that mostly owns franchises.”