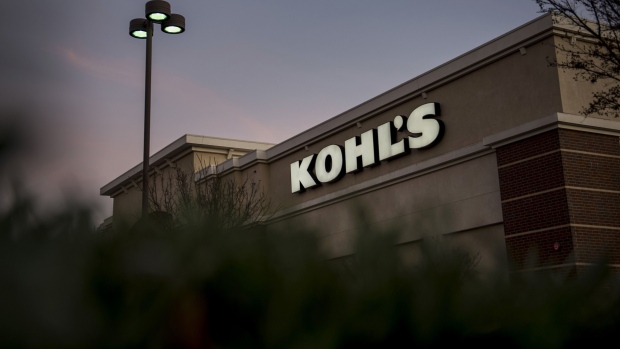 (Bloomberg) -- Kohl’s Corp. rose in premarket trading as the department store retailer fields interest from two suitors at the same time that it’s grappling with multiple activist investors pressuring it to sell.

Sycamore Partners reached out to Kohl’s about a potential deal, Bloomberg News reported Sunday, citing people familiar with the matter. That development came just days after a suitor backed by hedge fund Starboard Value LP emerged with a bid of $64 a share -- a 37% premium to Kohl’s Jan. 21 closing price -- worth about $9 billion.

The Menomonee Falls, Wisconsin-based retailer is already under fire from activist investor Macellum Advisors, which has been urging Kohl’s to make board changes or consider a sale. Kohl’s Chief Executive Officer Michelle Gass has been trying to boost foot traffic and sales at stores through partnerships with other retailers, most notably e-commerce giant Amazon.com Inc.

“We believe other strategic/financial bidders are possible & model potential upside to $85+,” Cowen Inc. analyst Oliver Chen wrote in a note to clients. “A transaction may realize value for shareholders more quickly” than Kohl’s can provide as a standalone company, he said.

The talks with Sycamore, a private equity retail specialist, are preliminary and might not result in a transaction, the people said, asking not to be identified because the matter is private. Sycamore has a track record of buying retailers including acquiring office chain Staples in 2017. Sycamore declined to comment, while a representative for Kohl’s couldn’t immediately be reached.

Sycamore is willing to pay at least $65 a share, according to CNBC.

Sycamore’s competition, Acacia Research Corp., is less well known and has so far only made offers before for small technology companies. Acacia, which is backed by activist investor Starboard and run by executive Clifford Press, takes stakes in companies with an eye for ownership. Acacia has a stake of less than 5% in the department store chain, people familiar with the matter said.

Another activist, Engine Capital LP, which owns about 1% of Kohl’s outstanding shares, sent a letter to the board in December urging it to run a review of strategic alternatives, including a sale of the company. Kohl’s was reported as a potential take-private candidate in May last year.

Engine Capital sent another letter to the company Sunday, urging it to run a sales process, the Wall Street Journal reported.

Kohl’s has been trying to make changes in pursuit of a business turnaround. In 2020, Kohl’s struck a deal with beauty products retailer Sephora to place shop-in-shops within the department-store chain. Kohl’s is also betting on athletic-leisure wear and said it sees sales in athletic wear being at least 30% of the business. Executives also often point to the fact that Kohl’s has advantages that other department-store chains don’t have by being mostly located in off-mall locations.

Bloomberg Intelligence analyst Hoai Ngo also sees the potential for other bids given the strength of Kohl’s real estate portfolio. The retailer owns 55% of its 1,162 stores, Ngo wrote in a research note.