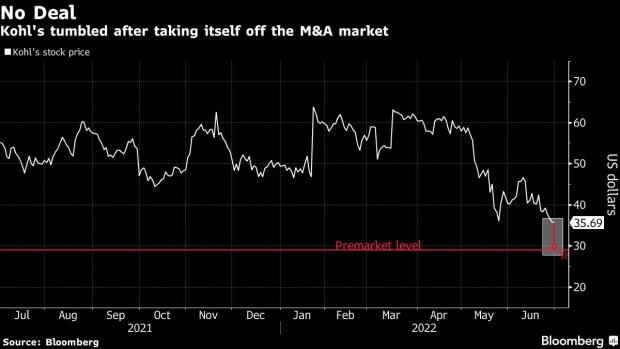 (Bloomberg) -- Kohl’s Corp.’s board concluded a strategic review without agreeing on a potential $8 billion sale to Franchise Group Inc., sending the department-store operator’s stock into a tailspin.

Franchise Group’s most recent offer price and terms reflected “the current financing and retail environment,” and it wasn’t prudent to continue pursuing a deal because of “market volatility,” Kohl’s said in a statement Friday. Franchise Group, the owner of the Vitamin Shoppe and Pet Supplies Plus, had revised its takeover proposal this week to $53 a share, down from $60 in early June.

Kohl’s shares tumbled 19% to around $29 in early trading at 8:34 a.m. New York time. The stock had already fallen 28% so far this year through Thursday’s close.

Deal talks have been breaking down across several industries as rising interest rates make financing more challenging. Earlier this week, Walgreens Boots Alliance Inc. abandoned the sale of its Boots drugstore chain that was expected to bring more than $6 billion. A turbulent credit market made it more difficult for potential buyers to meet that price, the company said.

Kohl’s said in a filing that it had received preliminary, nonbinding bids as high as $72 a share in late March and early April, but they weren’t viable because they lacked committed financing and were subject to due diligence. In all, the board said it engaged with more than 25 parties throughout the review process.

Investors had long been skeptical about the likelihood of a deal. Even after Kohl’s started exclusive negotiations with Franchise Group about its $60-a-share proposal, the stock was trading only around $46.

Kohl’s Chairman Peter Boneparth said on CNBC Friday that the proposed offer price was too low and he didn’t have conviction that the deal would close.

The Menomonee Falls, Wisconsin-based retailer must now convince Wall Street that it can succeed on its own, but it won’t be easy. The company slashed its profit and sales outlook for the year in May, citing higher expenses and weaker consumer demand. On Friday, Kohl’s said it now expects second-quarter sales to fall by a high-single-digit percentage, compared with a prior forecast for a low-single-digit decline relative to last year.

Kohl’s also said Friday that it’s taking another look at options for portions of its real-estate portfolio.