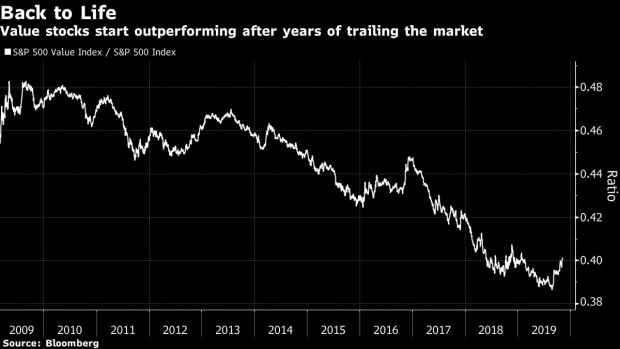 (Bloomberg) -- Investors should keep buying cheaper or cyclical stocks because the latest rally is just the start of an unwind of a massive fear trade that’s gripped assets from fixed income to commodities, according to JPMorgan Chase & Co.’s strategist Marko Kolanovic.

Value shares, or those traded at a lower price relative to profits or book value, will continue to outperform through the first quarter of next year, Kolanovic predicted, noting that the rally in recent months has been mostly driven by short sellers buying back shares to cover bearish bets. With economic data improving and the initial phase of a U.S.-China trade deal in sight, money managers will be forced to abandon their defensive posture and embrace cyclical shares that will benefit from a growth recovery, he said.

“This first leg of the rotation was limited to short covering by levered speculators, with little long only assets flowing into cyclicals and value,” the strategist wrote in a note to clients. “The larger rotation by real money managers will likely happen only after the phase one trade deal is signed, and rotation should continue during the seasonal Q1 value and small cap inflows.”

The equity market is in a midst of a rotation as cyclical companies such as banks are taking over leadership from defensives. In the past month, financial and industrial stocks have jumped more than 10% while past leaders like real estate and utilities succumbed to selling.

While the shift in investing styles coincides with a rise in Treasury yields, Kolanovic said he is waiting to hear from clients concerned that rising rates will derail the rally. A year ago, the elevation in 10-year Treasury yields above 3% helped spur a sell-off that drove the S&P 500 to the brink of a bear market. Ten-year yields recently hovered near 1.9%.

This time is different, the strategist argues. Back then, the Federal Reserve was raising interest rates and the trade war was escalating. Now, the central bank has cut interest rates three times in a row, and President Donald Trump is expected to sign a partial trade deal with his Chinese counterpart, Xi Jinping, this year.

“Our view and analysis suggest that yields can increase another ~150 bps before they become a potential problem,” Kolanovic wrote. “And that rising yields will only accelerate the upside in cyclical and value stocks as they reflect improving economic conditions.”

Too many investors are betting on the same end-of-world scenario and it’s causing normally unrelated assets to show unusually high correlation, JPMorgan found. The firm highlighted the recent lock-step moves between the momentum trade -- buying stock winners and selling losers -- and trend-following strategies that mostly own fixed-income instruments.

The two strategies are suddenly moving in tandem as money keeps piling into perceived havens: dividend and growth stocks, and government bonds.

In the eyes of Kolanovic and his colleagues, the world isn’t about to end. In fact, the firm’s model shows the economy is poised for an acceleration, particularly in Asia. When the fear trade is the consensus, investors better be prepared to be a contrarian.

“The most recent crowding episode was largely driven by bond yields, and fears of the trade war impact and recession,” Kolanovic wrote. “The best hedge for a continued unwind of this investment groupthink is to overweight deep cyclicals like energy, metals/mining, as well as small cap stocks.”

To contact the editors responsible for this story: Brad Olesen at bolesen3@bloomberg.net, Chris Nagi, Richard Richtmyer