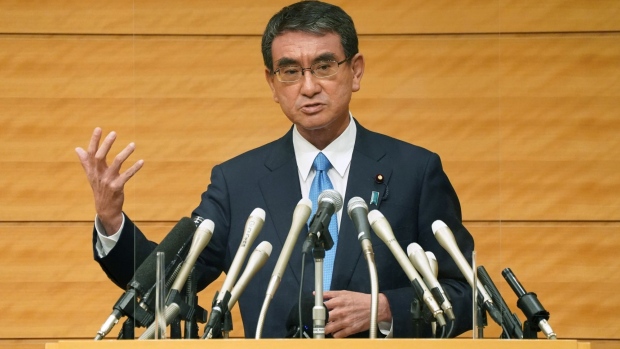 (Bloomberg) -- Japan’s vaccine czar Taro Kono looked to be gaining momentum in the race to be the next prime minister after reports said several ministers were planning to back him and one of his expected rivals would stay out of the contest.

Former Defense Minister Shigeru Ishiba, who had been considering a run to take the top job in the Liberal Democratic Party and replace outgoing Prime Minister Yoshihide Suga, has dropped the idea and is thinking of supporting Kono, the Yomiuri newspaper reported Tuesday, citing sources close to Ishiba.

The LDP is set to pick a new leader Sept. 29, with Kono facing former Foreign Minister Fumio Kishida and former Internal Affairs Minister Sanae Takaichi. The winner is almost guaranteed to become the country’s next prime minister due to the party’s dominance in parliament.

Kono told reporters he had requested Ishiba’s support in the event he doesn’t run. Kono also hinted that if he wins, Ishiba could be offered a top post in the government.

Public opinion polls show Kono, a 58-year-old with experience as foreign minister and defense minister, is the most popular option. While the public doesn’t get a say in the leadership vote, broad-based approval will be key as the new premier must face a general election just weeks after being appointed.

Suga said he was stepping down after about a year in the post as his support rate plummeted and criticism mounted over his management of the pandemic. Markets are expecting the next leader to back a massive spending plan to help revive a Covid-hit economy.

Although the official campaign doesn’t start until Friday, the three candidates have been busy trying to win over party members and appearing on television to broaden their appeal.

Takaichi is reported to be backed by former Prime Minister Shinzo Abe, while Kishida has his own faction within the LDP.

Environment Minister Shinjiro Koizumi, a close associate of Suga, is set to announce Tuesday he will back Kono, the Yomiuri said in a separate report, citing sources close to Koizumi. Suga has also told those around him he would support Kono, the paper said. Kono, the administrative reform minister, has been one of the most prominent members of Suga’s government.

Shinji Inoue and Yasufumi Tanahashi, ministers of state who each have a number of portfolios, both told reporters Tuesday they would back Kono, Kyodo News reported.