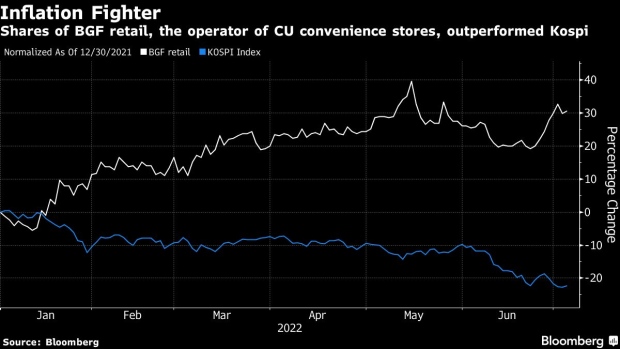 The stock has gained 30% this year as the broader Kospi has tumbled 21%, making the operator of the CU store chain among the top five winners in the blue-chip Kospi 200 index.

Analysts say the stock is a major beneficiary of consumers tightening belt amid sky-high prices while an easing of Covid restrictions is leading to a surge in social gatherings. BGF retail is expected to post a 30% jump in its annual net income this year, according to Bloomberg-compiled data.

More than 15,000 CU stores, omnipresent on almost every corner in major Korean cities including near baseball stadiums, schools and parks, are seeing a spike in traffic with government allowing sports, concerts and other outdoor events to take place without restrictions. Korea’s inflation hit its fastest clip since late 1998 in June, advancing 6% from a year earlier.

“People are out and about late night. Concert halls and baseball stadiums are full. Schools are resuming on-site events. Late-night businesses are back. All of these create traffic for convenience stores,” said Yu Jung-Hyun, an analyst at Daishin Securities.

Convenience stores are “inflation fighters,” according to Yu, as they sell consumer staples, such as the $2 lunch box, popular among workers who are returning to the office and find themselves in the so-called unprecedented “lunchflation.”