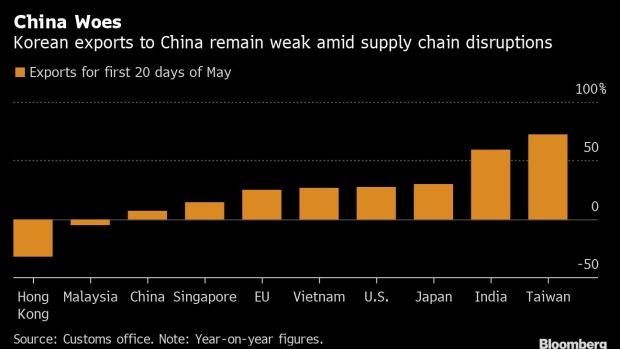 South Korea’s early trade data showed signs of cooling export gains in May as the global economy adjusts to fallout from the war in Ukraine and China’s virus lockdowns weigh on supply chains.

While exports advanced 24.1% in the first 20 days of the month from a year earlier, helped by a rebound in auto shipments, figures for average daily shipments showed just a 7.6% increase, for the smallest gain in preliminary data since the end of 2020. Exports to China continued to show weakness.

The main result was inflated by two extra working days in the period this year, compared with last May, according to a customs office statement Monday. Overall imports rose 37.8%, resulting in a trade deficit of $4.8 billion, as energy costs stay high.

Exports underpin South Korea’s economy and their performance for the first 20 days of a month is considered an early indicator of global demand. The nation ships everything from cars to displays to semiconductors and global trade has been buffeted by higher energy and commodity prices since Russia invaded Ukraine in February.

While the figures suggest continued resilience in demand from around the world, the weakness in exports to China show the ongoing impact of lockdowns in some of the major cities there, causing disruptions in maritime transport and factory operations.

“The slowdown in exports to China is the biggest drag as the lockdowns have hurt demand for imports among consumer-facing industries,” said Cho Yong-won, a researcher at the Korea Institute for Industrial Economics and Trade. “High oil costs, if they continue, may also prompt exporters to rethink plans to increase production as profit margins dwindle.”

Exports to China in the period showed only a single-digit rise, compared with shipments to the US and Japan that stayed robust, increasing 27.6% and 29.7%, respectively. Still, a gain from a year earlier indicates conditions have improved since April when monthly shipments fell.

Korean policy makers are concerned about inflation eating into the bottom line of companies reliant on imported materials and hurting the currency. The country is likely to post another trade deficit this month due to the high costs of energy imports and parts to assemble the products it exports.

Overall semiconductor shipments increased 13.5%, for the smallest gain in preliminary data since the supply snags of September. Oil products jumped 145.1%. Sales of wireless communication devices fell 21.3%. Exports of automobiles rose 17.5%, for the first gain in three months in early figures.