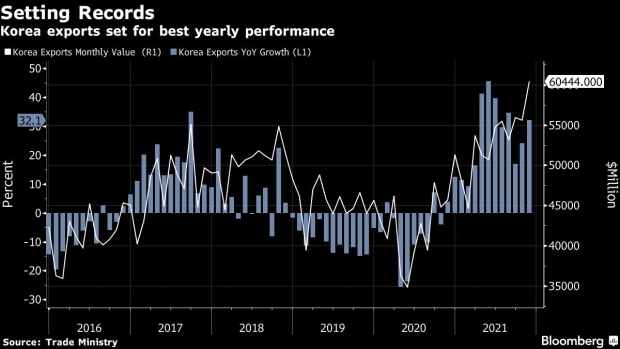 (Bloomberg) -- South Korea’s exports are on track to post an annual record, buoyed by year-end holiday demand and higher product prices even as supply chain bottlenecks continued to pressure manufacturers.

Exports rose 32.1% in November from a year earlier to $60.4 billion, a monthly record, data from the trade ministry showed Wednesday. The ministry said overseas shipment are on track to reach the highest annual value in the country’s trade history.

Korea’s shipments to China last month were also the highest ever, while exports to other key markets posted double-digit gains. Sales of chips, the country’s cash cow, jumped 40%.

The result bodes well for a Korean economy that’s relied on exports to underpin growth amid on-again, off-again Covid-19 restrictions that hampered a recovery in household spending. The approaching holiday season likely provided a fillip to overseas demand, while a stabilization in China’s manufacturing sector offered additional support.

Korea’s manufacturing sector also improved, with the purchasing managers’ index edging up to 50.9 from 50.2 in October, according to IHS Markit data. While the level indicates a month-on-month expansion in activity, it’s still this year’s second-lowest reading.

For global trade, much remains uncertain heading into 2022. The new omicron variant of the coronavirus has the potential to derail the reopening of economies, and could cause further disruptions to already-strained supply chains.

The ministry touted the country’s strong trade performance in Wednesday’s statement, but also warned against threats from the spread of the new variant, raw material supply issues and rising shipping costs.

“The impact of the omicron variant isn’t yet clear. On one hand, derailed reopenings could pose upside risk to exports if households rotate spending to goods. On the other, downside risks could materialize if supply-chain disruptions worsen.”

The development of the pandemic will also have a significant bearing on Korea’s monetary policy. The Bank of Korea has spearheaded the region’s tightening with two interest-rate increases since August, with the most recent hike occurring just before omicron emerged.

Korea’s imports also surged in November, rising by 43.6% from a year earlier to leave a trade surplus of $3.09 billion.

Overall exports of petrochemicals were up 63%, as gasoline items jumped more than 100%. Automobile exports climbed 3.3%, while mobile communications devices advanced 16.5%.

November’s export performance was a combination of rising prices and volumes, the ministry said. Export prices rose 22.1%, while volume gained 8.2%.