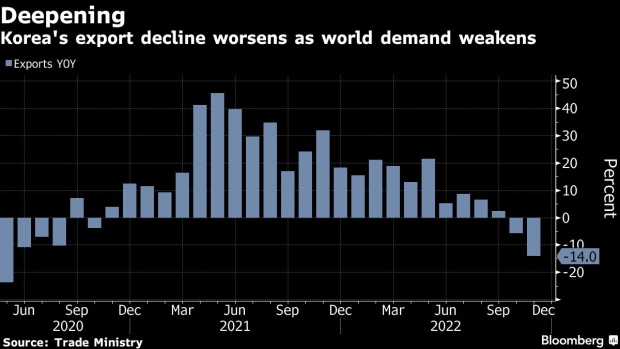 Containers at the Uiwang Inland Container Depot in Uiwang, South Korea, on Thursday, Nov. 24, 2022. Truck drivers are on strike in South Korea for the second time in less than a year, targeting major ports in a bid to disrupt key exports from autos to petrochemicals. Photographer: SeongJoon Cho/Bloomberg , Bloomberg

(Bloomberg) -- South Korea’s exports fell the most in two-and-a-half years in November, dragged down by an economic slowdown in China and cooling demand for semiconductors.

Total shipments fell 14% from a year earlier in the first double-digit drop since mid-2020, the trade ministry said Thursday in a statement. Imports advanced 2.7%, resulting in a trade deficit of $7 billion.

“Unless China’s economy comes back strong, chip demand isn’t going to rally back to bring the prices back up,” said Cho Chuel, an analyst at the Korea Institute for Industrial Economics & Trade. “China’s situation will get better next year, but probably not drastically until the second half.”

Korea’s trade depends heavily on momentum in global memory-chip sales. The dynamic random access memory industry in which Samsung Electronics Co. remains the leader shrank by almost 30% in the July-to-September period. That was the second largest quarterly decline since the global financial crisis, according to TrendForce.

Rivalry between Washington and Beijing over semiconductors looms as a long-term threat to Korea. Taiwan warned this week that its chip exports may be impacted by US curbs on sales to China.

The Bank of Korea sees exports remaining in the doldrums for months to come as it signals its policy tightening cycle is set to wind down early next year. A steady trade performance had given the central bank confidence to keep raising rates to cool inflationary pressures and shore up the won.

Korean exports are a closely-watched bellwether of global trade as the nation manufactures key items such as chips, displays and refined oil.

A nationwide truckers’ strike is compounding trade difficulties by threatening to further disrupt supply chains. The trade ministry partly blamed the strike for the deterioration in exports.

Elevated oil prices and a fluctuating currency remain risks for the nation’s exporters. Korea is on track to record its first annual trade deficit since the global financial crisis.

Total automobile shipments advanced 31% in November from a year earlier, while exports of oil products rose 26%.

Overall exports to the U.S. gained 8%, while those to the European Union edged up 0.1%. Shipments to the Middle East increased 4.5%.

The BOK’s updated report on gross domestic product also released on Thursday showed the economy grew 0.3% last quarter from the prior three months, unchanged from the initial estimate.

The BOK sees the economy expanding 1.7% next year, a slowdown from the 2.6% forecast for this year.