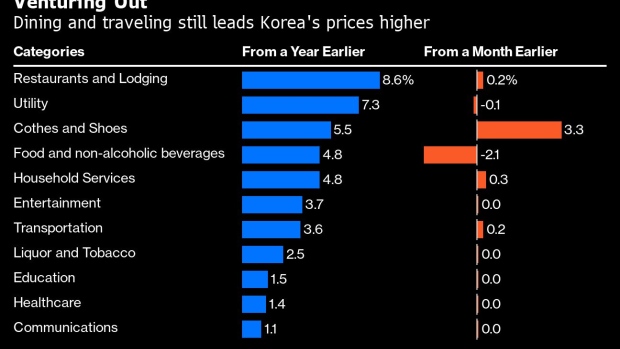 Consumer prices advanced 5% from a year earlier, slowing from October’s 5.7% pace and below the 5.2% forecast by economists, statistics office data showed Friday. From the prior month, prices fell 0.1%, also weaker than expected.

In contrast, core inflation that excludes volatile items like oil and agricultural products held at 4.8% in November from a year prior, coming in above the median estimate of 4.5%.

“This keeps the central bank’s worries alive,” said Lim Dong-min, a researcher at Kyobo Securities. “The BOK continues to believe demand should cool to push prices down even if that may put pressure on the economy in the short-term.”

Bank of Korea Governor Rhee Chang-yong signaled last week that headline inflation was expected to be slower in November as prices of agricultural products had jumped a year prior due to a bout of cold weather. He didn’t expect the effect to last.

Reinforcing that view, in a statement following today’s report the central bank pointed to base effect, adding that it continued to expect consumer prices to climb at about 5% until early next year.

The comments suggest the BOK is likely to keep tightening, having raised rates by 2.75 percentage points since August last year. At last week’s meeting where the bank hiked by a quarter percentage point, Rhee indicated a majority of the board sees one more quarter-point move to hit a peak rate of 3.5%.

The governor declined to give his estimate of the terminal rate.

The rate rises come as risks mount to the economic outlook with exports falling and industrial production weakening. A credit crunch following the default of a government-backed developer is also weighing on investors.

The Korean currency weakened below 1,400 per dollar in September and October in response to the Federal Reserve’s outsized rate increases, driving up the cost of imports. The won has since rebounded as the Fed signaled a downshift ahead.

The BOK next meets in January and inflation will be a key factor in its decision. It will also be monitoring Fed moves and China’s Covid stance as policy makers in Seoul move toward winding down their tightening cycle and plotting their next course of action.

A breakdown of the inflation report showed people were still venturing out to enjoy themselves despite rising prices.

Costs of dining and lodging jumped 8.6%; food and beverage prices increased 4.8%; and transport costs rose 3.6% from a year earlier.