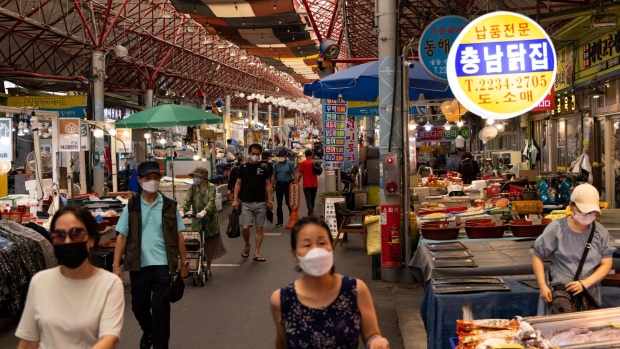 A shopper at Seoul Central Market in the Jung-gu district of Seoul, South Korea, on Saturday, July 31, 2021. For decades, Seoul Central Market, with its shabby shops and grungy street food, has been a gathering place for retirees seeking cheap meals, clothing and kitchenware. These days, they’re increasingly competing for space with hipsters in heels and Birkenstocks who stroll past chic restaurants and cafes sprouting between hole-in-the-wall rice shops and noodle joints. Photographer: SeongJoon Cho/Bloomberg , Bloomberg

(Bloomberg) -- South Korea’s inflation reached the highest since 2011, reinforcing concerns that strong price pressures will persist as the release of pent-up demand runs up against ongoing supply bottlenecks.

Consumer prices rose 3.7% in November from a year earlier, the statistics office said Thursday, compared with economists’ estimate for a 3.1% increase. That extended the run of gains above the Bank of Korea’s 2% target to an eighth straight month, supporting the central bank’s decision to raise interest rates last week.

Korea is among a growing cohort of economies struggling to contain prices. Accelerating inflation is a risk to Korea’s recovery, threatening to undermine households’ spending power and erode corporate profits.

With inflation expectations also on the rise, BOK Governor Lee Ju-yeol is concerned that the trend could set off demands for faster wage increases that could broaden inflation pressures.

A separate report from the BOK today showed the economy expanded 0.3% in the third quarter from the April-June period, matching the bank’s initial estimate.

Korea’s growth and price outlook is clouded by the global spread of the omicron variant, with the nation confirming its first cases on Wednesday. The government has postponed a full reopening of the economy in response to the new variant, and a worsening of the outbreak could weigh on consumption and services.

Meantime, if the new strain were to trigger a renewed round of lockdowns worldwide, supply chain disruptions would only worsen and add to price pressures.

In a shift from its earlier transitory stance, the BOK last week raised its forecast inflation for 2022 to 2% from 1.5%, meaning it expects price gains to exceed, or at least hover around, the target through next year. The projection for this year was lifted to 2.3% from 2.1%.