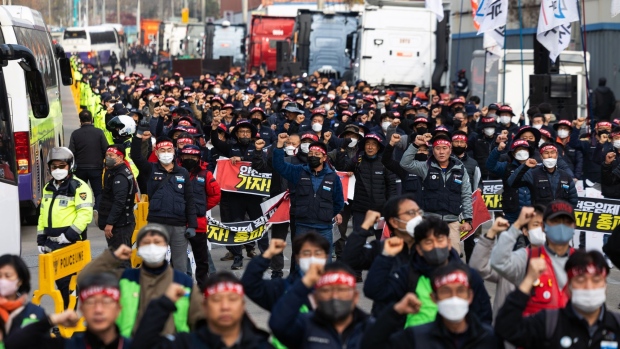 Truck drivers and members of the Korean Confederation of Trade Unions shout slogans during a protest at the Uiwang Inland Container Depot in Uiwang, South Korea, on Thursday, Nov. 24, 2022. Truck drivers are on strike in South Korea for the second time in less than a year, targeting major ports in a bid to disrupt key exports from autos to petrochemicals. , Bloomberg

(Bloomberg) -- A South Korean official said the government is considering issuing an order to disband a strike by truck drivers that has blocked ports and industrial complexes, hampering supplies of key exports.

“We are doing our best to minimize supply disruptions and taking emergency steps,” said Transport Minister Won Hee-ryong during a visit to the port of Busan on Thursday. “In case the situation gets serious, we are considering issuing a decree” ordering local shippers to restart work on concerns that their action pose a threat to the economy, he said.

The government has asked the union for fresh talks to resolve the situation, the ministry said in an emailed statement Friday. Details of the talks will be announced soon, it said.

The strike is already having some impact since it started Thursday morning. The number of containers moving into and out of South Korea’s ports between 5 p.m. Thursday and 10 a.m. Friday fell 49% from normal levels, the transport ministry said.

Supply disruptions were seen at some industries on the first day of the strike, especially at cement and steel producers, according to the trade ministry. Cement makers may be hit hard as their customers can’t keep inventories for more than two days, it said.

The strike adds pressure to the Korean economy as it faces risks from higher rates and commodity prices. The Bank of Korea opted for a small rate hike Thursday, citing rising credit risks and corporate loans, and warned that inflation will stay above 5% for some time.

Truckers are protesting a lack of progress on wage demands after months of negotiations following a previous work stoppage in June. The union is trying to expand and extend a system that calculates minimum wages based on operating costs, including fuel prices. The government has called for extending the system for three years, but limiting it only to the current industries.

The union is showing “a violent act” by blocking entrances of plants and bullying drivers who didn’t join the strike, South Korea President Yoon Suk Yeol said in his Facebook profile, repeating he will “strictly respond to any illegal activities.”

About 11,000 of 25,000 members of the truckers union participated in the strike on Thursday, the group said in a statement. Demonstrations have taken place at 60 sites, including seven major ports, three petrochemical complexes and a large shipping hub in Gyeonggi, the statement said.

--With assistance from Sangmi Cha and Ann Koh.

(Updates with the government proposal for talks with union in third paragraph.)