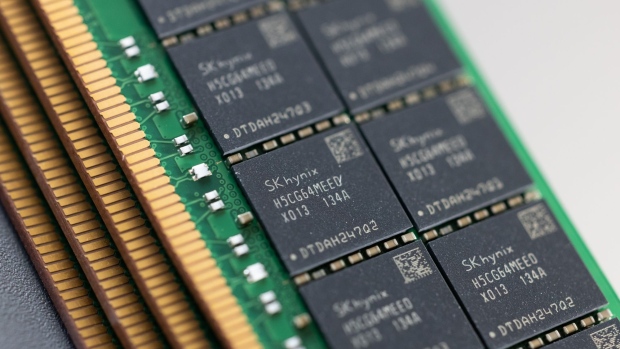 (Bloomberg) -- SK Hynix Inc. warned that the Biden administration’s escalating restrictions could force the closure or sale of a major plant in China, an “extreme situation” or worst-case scenario it hopes to avert.

Hynix told analysts the memory chip giant was preparing for various contingencies, including the possibility that Washington’s curbs could prevent it from getting the gear it needs to sustain its DRAM factory in Wuxi. Hynix would then be forced to sell or move the production equipment to South Korea, Chief Marketing Officer Kevin Noh said.

The US Commerce Department this month unveiled sweeping regulations that limit the sale of semiconductors and chipmaking equipment to Chinese customers, striking at the foundation of the country’s efforts to build its own chip industry.

The curbs have also cast uncertainty over major Chinese operations run by foreign firms including Hynix and larger rival Samsung Electronics Co. Both firms have obtained a one-year waiver that lets them import the equipment they need to maintain or potentially expand their factories. Hynix, which on Wednesday warned it will cut capital spending by half in 2023 to reflect waning electronics demand, is hopeful it can continue to operate in China.

“Comments on the possible transfer of our Chinese facilities are based on outlier scenarios with low probably of occurrence,” Hynix said in a statement after the conference call. “We want to make it clear that we are not actively considering contingency plans, and we have not reviewed such options seriously or in detail.”

But fears persist that the US curbs could curtail production at Hynix and other chipmakers’ factories there. Hynix’s Noh said it was essential for the company to diversify its production bases in the mid- to long-term, but that’s complicated and it was hard to make changes at current facilities at the moment.

“If the time comes when it appears difficult to maintain operation of the fab in Wuxi, then we might have to sell off the fab or move the equipment to Korea,” Noh said. “We are looking into various scenarios, but again, this would amount to a contingency. So this would be an extreme situation.”

Read more: SK Hynix Cuts Capex in Half With ‘Unprecedented’ Drop in Demand

(Updates with additional comment from Hynix in the fifth paragraph. A previous version was corrected to reflect the executive’s proper title.)