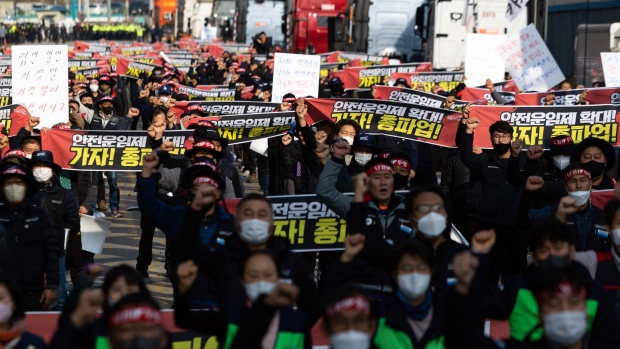 Truck drivers and members of the Korean Confederation of Trade Unions during a protest at the Uiwang Inland Container Depot in Uiwang, South Korea, on Nov. 24. , Photographer: SeongJoon Cho/Bloomberg

(Bloomberg) -- Worker discontent is breaking out across South Korea, threatening to undermine the country’s already faltering economy and presenting yet another challenge to President Yoon Suk Yeol.

The Asian nation’s labor strife deepened this week as threatened protests by public transport workers added to a nationwide strike by truck drivers. While a work stoppage by the railroad union was averted on Friday and subway workers settled their dispute, the ongoing truckers’ strike has caused at least $1.2 billion in supply disruptions in everything from steel to autos and oil.

South Korea is emerging as one of the most visible hot spots for growing labor discontent, as workers around the world demand safer conditions and better wage systems in the face of soaring food and commodities prices. The upheaval is putting a strain on supply chains, threatening to weigh further on weakening economies.

That’s adding up to another major headache for Yoon’s already unpopular administration. Yoon, a conservative and a former prosecutor, won the presidential race by the slimmest margin in the country’s history.

His support rate is at 31%, according to the latest Gallup poll, after hitting a low of 24% in September. That’s sharply below the 51% rating when he took office in May, with respondents citing troubles with diplomacy and a lack of experience as reasons for disapproval.

The clash comes at a pivotal time for Korea’s economy that’s already reeling from slowing exports, surging consumer prices and a fluctuating currency. The nation is on track to record its first annual trade deficit since the global financial crisis, with exports sliding the most since mid-2020 last month.

The truckers strike -- which has lasted more than a week -- threatens to cause further damage to global supply chains and the Korean economy if it drags on.

“South Korea has made rapid economic growth, but still has no solid principles in handling social issues,” said Jung Yeon-Sung, a business administration professor at Dankook University in Seoul.

Strikes and demonstrations take place on a regular basis in South Korea. The ubiquity of protests can be seen in places like Gwanghwamun Square in the heart of Seoul, which has long been the hotbed for mid- to long-term protests. It’s where mass candlelit demonstration occurred following the 2014 Sewol ferry disaster, which led to the resignation of the prime minister and eventually the impeachment of President Park Geun-hye.

South Korea’s walkout culture comes from a “strike first, bargain later” practice, which puts pressure on the employer before going into collective bargaining. The strategy has driven up the overall number of strikes compared with many nations, where walkouts often take place only after negotiations have failed.

South Korea had about 600 labor strikes and lockouts between 2015 and 2019, more than the number for the UK and US combined, according to International Labour Organization data compiled by Bloomberg. South Korean strikes over the past five years have caused an estimated production loss of about 6.5 trillion won ($5 billion), according to the Federation of Korean Industries.

Hostility between labor and management has been closely linked to Korea’s democracy movements.

Until 1987, when democracy started to take root, unions were suppressed by the nation’s authoritarian leaders. After that, workers began to show solidarity across industries, demanding a bigger share of the country’s increasing wealth. Strikes between 1987 and 1997 were aimed at wage increases, while after the Asian financial crisis in 1997 the focus shifted to job security.

Blue-collar workers under giant conglomerates can be aggressive and primed for conflict. Extended strikes have involved violent and bitter protests where car-burnings, window-breaking and even self immolations have taken place. In 1995, Yang Bong Soo, a Hyundai Motor Co. union activist dismissed for protesting work practices, died from injuries after setting himself on fire.

Yoon has taken a hard-line approach toward labor, as his administration has focused more on economic growth than social welfare. The conservative government has repeatedly emphasized the importance of establishing the “rule of law” between labor and management, and said he would “strictly respond to any illegal activities.”

Earlier this week, the government took a dramatic step, ordering cement truckers to return to work. The union has criticized the order, saying the protests will continue. They are demanding a better wage scheme that guarantees minimum freight rates, which would help to ease the pressure of keeping up with skyrocketing fuel costs.

As both sides dig in on their positions, the wide gap may make it difficult to reach an agreement.

“The strike may last for a longer period than previous ones, given that President Yoon, a former prosecutor, stresses legal principals, while unions made some successes in negotiations with former governments that were more conciliatory toward unions,” said Jung.