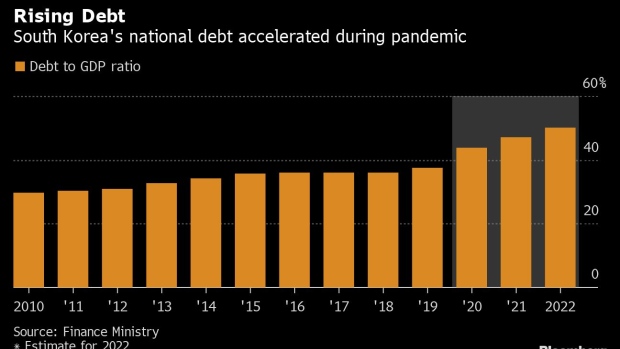 (Bloomberg) -- South Korea will tighten a broad limit on fiscal spending to rein in national debt that accelerated during the pandemic, President Yoon Suk Yeol said.

“Our economy is facing a complex crisis of high inflation, high interest rates and low growth,” Yoon said Thursday at a meeting mapping out fiscal strategies for the next five years of his term. “The government has to take the lead in tightening the belt to overcome a fiscal crisis and people’s livelihood issues.”

Yoon took office in May after defeating his predecessor Moon Jae-in’s Democratic Party. His government seeks to keep the debt to gross national product ratio around mid-50% by 2027, the Finance Ministry said in a separate statement. The Moon administration had proposed to set the limit on the ratio at 60%.

As debt piles up across the world as a result of the pandemic, Yoon’s move reflects a sense of urgency over the longer-term impacts of keeping fiscal policy loose.

South Korea has seen the debt-to-GDP ratio rise from 36% in 2017 to slightly over 50% this year as it relied on a series of extra budgets to shore up the virus-hit economy.

While South Korea wasn’t alone in increasing expenditures during the pandemic, the move contrasted with its earlier conservatism that stemmed from concerns over an aging population and a potential reunification with North Korea.

The new government will also simplify and tighten fiscal guidelines proposed in 2020 under Moon, the ministry said. It did not comment on whether it would decrease bond issuances or seek a smaller increase in annual budgets to ease fiscal burdens.

South Korea has one of the lowest but fastest-rising debt-to-GDP ratios among developed nations. In recent years there’s been greater debate over whether the country has more room to leverage debt to help the economy.

Supporters of a more conservative policy contend the won not being a major currency is a key barrier to raising debt too quickly. South Korea’s debt-to-GDP share has now almost reached the average among nations with non-reserve currencies, which is 54%, the ministry said.

The won has been among the worst performers this year along with the yen in Asia as the Federal Reserve accelerates its policy tightening.

After lowering borrowing costs to record levels to support the recovery during the pandemic, the Bank of Korea is also on a path to tighter policy and will likely carry out its sixth interest-rate hike since last year next week, economists say.