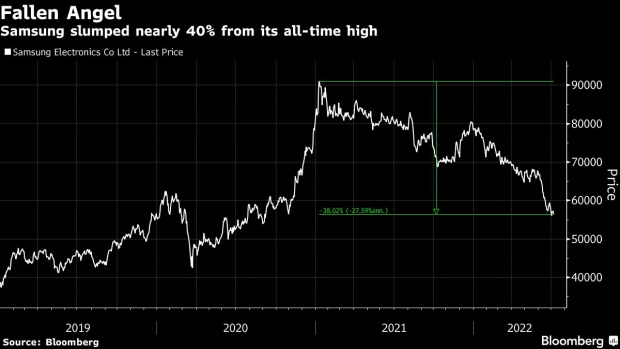 (Bloomberg) -- South Korean hedge fund Billionfold Asset Management Inc. said it started buying Samsung Electronics Co. this week on the view the stock’s plunge of almost 40% from a record high is coming to an end.

Excessive selling has made Samsung shares attractive, An Hyungjin, the chief executive officer of the 170 billion won ($130 million) fund, said in an interview in Seoul on Wednesday.  “We are nearing the bottom,” An said.

Samsung shares were up as much as 3.2% in morning trading in Seoul Thursday after the company reported a better-than-anticipated 21% jump in revenue, assuaging investors’ worst fears about the impact of weakening consumer demand and soaring materials costs on tech giants.

Billionfold also began adding NCSoft Corp. this week on expectations its four new titles in the pipeline for next year will improve the company’s outlook, according to An. The game developer is down about 65% from its 2021 peak after the flop of a new title spurred earnings concerns.

The fund posted a 1% loss during the first six months of this year, An said, outperforming the benchmark Kospi’s 22% slide and Kosdaq’s 27% slump.

Heavy selling by foreign investors triggered the Kospi’s rout in the first half, during which their holdings of Samsung Electronics dropped to a six-year low.