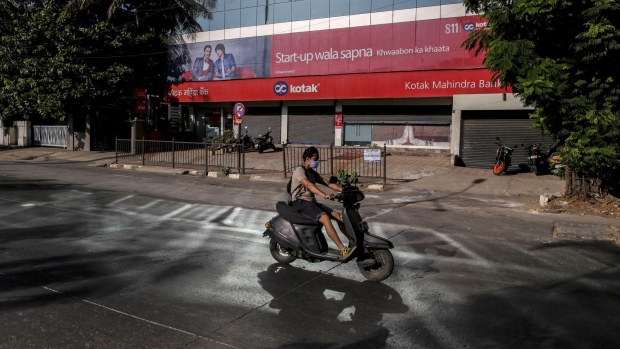 A motorcyclist wearing a protective mask rides past a Kotak Mahindra Bank Ltd. branch on a near-empty street in Mumbai, India, on Monday, May 4, 2020. India's central bank Governor Shaktikanta Das and the chief executive officers of the nation's banks have discussed ways to ensure credit flow to businesses once the world's toughest stay-at-home order ends. , Bloomberg

(Bloomberg) -- Kotak Mahindra Bank Ltd. posted a smaller-than-expected drop in second-quarter profit after it set aside fewer provisions for bad loans than in the previous three months.

Net income stood at 20.3 billion rupees ($270 million) in the September quarter, compared with 21.8 billion rupees a year earlier, according to a statement Tuesday. That beat the average 18.6 billion rupees estimate from 13 analysts in a Bloomberg survey.

Kotak Mahindra Bank, founded by the world’s richest banker, Uday Kotak, is bolstering a relatively safe retail lending book after slowing its overall credit growth over the past few years when India was gripped by a shadow lending crisis and then the global pandemic.