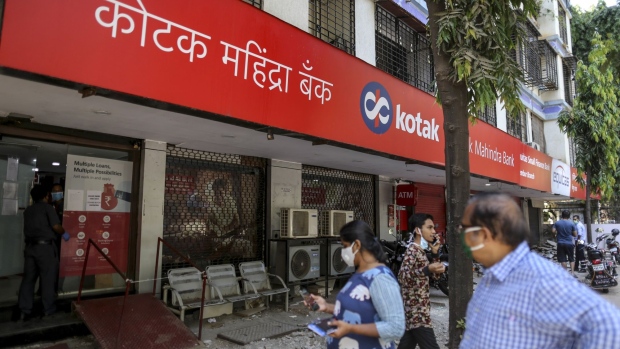 Net income climbed 27% to 21.8 billion rupees ($295 million) for the three months ended Sept. 30 from a year earlier, the Mumbai-based bank said in a filing Monday. That beat expectations from analysts who expected a profit of 13.4 billion rupees, according to data compiled by Bloomberg.

The lender said it set aside 3.7 billion rupees in provisions during the quarter, compared with 4.1 billion rupees a year earlier. Indian lenders -- like others globally -- have been stepping up buffers to protect themselves from the financial fallout of the coronavirus pandemic.

Still, Kotak Mahindra’s gross bad loan ratio fell slightly to 2.55% at the end of September, compared with 2.7% three months earlier. The ratio would have stayed at that level if India’s top court hadn’t allowed lenders to continue with a relaxation of rules around bad debt recognition, it said.

Kotak Mahindra, backed by Asia’s richest banker Uday Kotak, is exploring the takeover of smaller Indian rival IndusInd Bank Ltd., people with knowledge of the matter said this week. A deal would cement Kotak Mahindra’s position as one of India’s leading private banks, boosting its assets by about 83%.

A spokesman for Kotak Mahindra declined to comment on the takeover plans, while a representative for IndusInd denied the report.

(Updates with details from third paragraph.)