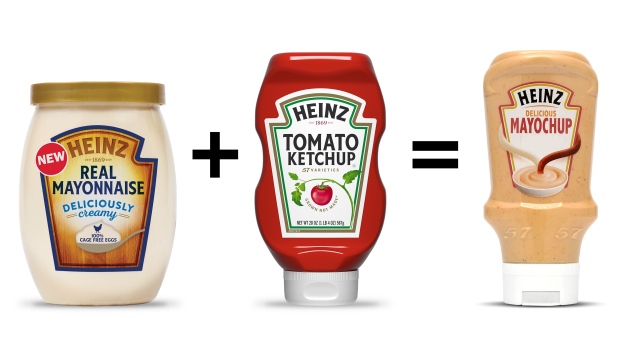 Heinz is asking America if it wants Ketchup and Mayonnaise mixed together ("Mayochup") to be available in stores. , Image courtesy of Kraft Heinz via Twitter

Mayochup might not be exactly what investors have been craving from Kraft Heinz Co. (KHC.O), but the company is betting it will help whet their appetite for growth.

The packaged-food giant, unable for now to fulfill its goal of expansion via acquisitions, is polling consumers on Twitter on whether they’d buy a ketchup-mayonnaise fusion. Kraft Heinz says that 500,000 votes in favor of Mayochup by Apr. 15 will trigger the product’s entry to U.S. supermarket aisles.

The poll is part of “a comprehensive marketing campaign to drive mass awareness” of the product, the company has said. After a failed bid to buy Unilever last year, Kraft Heinz faces the challenge of creating buzz for its stable of established brands -- which include Oscar Mayer hot dogs, Philadelphia cream cheese and Capri Sun drinks -- as consumers increasingly embrace upstart products and some grocery-store staples fall out of favor.

Want #mayochup in stores? 500,000 votes for “yes” and we’ll release it to you saucy Americans.

The company slashed jobs and expenses after it was created from a 2015 merger orchestrated by 3G Capital and Warren Buffett’s Berkshire Hathaway Inc. Investors have widely speculated it would repeat this formula at acquired companies.

With a mega-deal failing to materialize, Kraft Heinz is under pressure to prove it can grow organically. While it posted small sales gains in the two most-recent quarters, those followed a lengthy decline.

“It’s too early to tell about the potential for this product, although the skeptic in me sees little opportunity in a very crowded condiment and dressings market,” Bloomberg Intelligence analyst Kenneth Shea said. The company will need to do a lot more product innovation to boost sales, he said.

Kraft Heinz has also started a new incubator division, called Springboard, aimed at new product development to capture growth that can’t be obtained via brands like Velveeta and Jell-O.

The company’s proposed Mayochup has succeeded in gaining attention, although not all of it positive. While comments on Twitter show that some look forward to getting the condiments pre-mixed (“Because the Lord answers all prayers”), others suggested the product category already exists under another name (“fry sauce”) or that the name was unappealing.

Look @HeinzKetchup_US, you might not care what a Lt. Governor thinks (or, like most people, what a Lt. Governor even is), but don’t make me bring @JimGaffigan into this #mayochup debate. It’s called FRY SAUCE. #DoTheRightThing #FrySauceGate pic.twitter.com/oPCRKO95c8