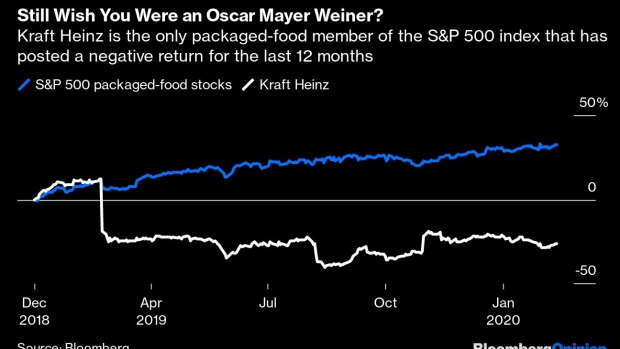 (Bloomberg Opinion) -- It’s never good when a CEO has to kick off his company’s year-end earnings report, as Kraft Heinz Co.’s did Thursday morning, by saying: “While our 2019 results were disappointing ...” Disappointing is putting it mildly, though. Try miserable.

To recap: It was one year ago this month that the packaged-food manufacturer suffered a $15.4 billion writedown because of damage — largely self-inflicted — to the value of two of its biggest brand names, Kraft and Oscar Mayer. A slash to shareholders’ dividends and the oh-by-the-way mention of a Securities and Exchange Commission inquiry into some accounting practices added to Kraft Heinz’s troubles. The stock, adored by Warren Buffett, its top shareholder, has been down 38% ever since. Right up until then, this was the company that most analysts promoted to their clients and every food giant wanted to emulate — a lean, profit-margin machine operated by a bunch of private equity guys that just so happens to sell food.

Kraft Heinz’s sales continued to slide in the final three months of 2019 to $6.54 billion, a 2.2% drop when excluding the effect of business divestitures. On most metrics, Thursday’s results beat the average of analysts’ estimates, and CEO Miguel Patricio said he expects to make “significant progress” this year in the company’s ongoing turnaround. But there’s been little evidence of improvement yet, and he’s nearly eight months into the job, after taking over from Bernardo Hees, one of the aforementioned private equity partners from 3G Capital. (That’s the shop that merged Kraft Foods and H.J. Heinz condiments in 2015 with the financial backing of Buffett’s Berkshire Hathaway Inc.)

In a recent interview with my Bloomberg News colleagues, Patricio talked about spending more on the company’s biggest moneymakers, such as Philadelphia cream cheese and Heinz ketchup, but not by increasing the budget — this is still a 3G company, after all. Instead, he’ll be shifting around resources to prioritize the most promising products and brands, as cheese, coffee and cold cuts continue to be the problem areas. In the latest quarter, Kraft wrote down the carrying value of its Maxwell House trademark by $213 million, part of an overall $666 million impairment charge that was primarily driven by its international businesses.

Of course, Kraft Heinz isn’t the only consumer-products company that’s been thrown for a loop by shoppers’ changing appetites. The move toward less-processed, healthier-sounding foods and the villainization of sugar and carbohydrates has weighed on every household name in the industry. Some have been dealing with it by acquiring the fast-growing upstart brands that have been encroaching on their supermarket shelf space. PepsiCo Inc. has done a version of what Kraft Heinz is attempting by making a big push for chips like Doritos that are holding up even as more seemingly wholesome snacks gain popularity. The soda giant reported sales and earnings that beat expectations on Thursday, with operating profit rising 3% in its Frito-Lay North America chips division; beverage sales managed to climb, too.

A new CEO walking into Kraft Heinz’s mess deserves time to get a handle on things. But now it’s time to lay out a concrete strategy that shows Kraft Heinz understands the root cause of its problems, that the entire 3G ethos had the company under-investing in its products at exactly the time it needed to be doing the exact opposite. Patricio says to stay tuned for May, when he’ll unveil such a plan. Investors can’t possibly feel optimistic until they see it.