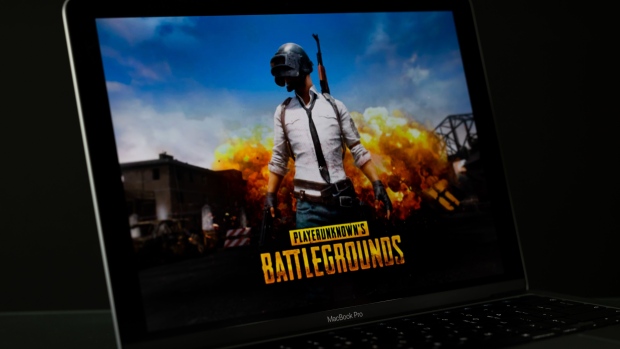 The PlayerUnknown's Battlegrounds (PUBG) video game is arranged a computer screen in Seoul, South Korea, on June 15, 2021. Krafton Inc., the company behind the hit mobile game PUBG, filed to raise as much as 5.6 trillion won ($5 billion) in a South Korean initial public offering that is set to be the country’s largest ever. Photographer: SeongJoon Cho/Bloomberg , Bloomberg

(Bloomberg) -- Krafton Inc. set the price for its initial public offering at the top of a revised range, on track to make the second-largest debut on record in Seoul.

The Tencent Holdings Ltd.-backed game developer behind hit game PlayerUnknown’s Battlegrounds and some of its shareholders will raise 4.3 trillion won ($3.8 billion), after setting the price for its 8.65 million share sale at 498,000 won apiece, according to a filing on Thursday.

The startup said the offering was 243 times subscribed by institutional investors, after a local financial watchdog asked the company to revise its prospectus last month following concerns its valuation was too high. The final share price values the 14-year-old startup, which derives nearly all of its sales from PUBG, at 24.35 trillion won, larger than NCSoft Corp., the biggest game developer listed in South Korea.

The Seongnam, South Korea-based company is scheduled to start trading on the Korea Exchange on Aug. 10.

The debut will be the largest in Seoul since Samsung Life Insurance Co. listed in 2010. Krafton, KakaoBank Corp., Kakao Pay Corp. as well as Coupang Inc., which had its mega IPO in New York in March, are among a slew of companies that are helping make 2021 a record year for new floats by South Korean corporations, after retail investors fueled a more than 30% surge in the benchmark Kospi index last year.

But the high valuations of some of the impending IPOS fueled criticism of a potential bubble in the stock market, prompting the local financial watchdog to order both Krafton and Kakao Pay to revise their prospectuses. Krafton eventually cut its targeted offering by more than 1 trillion won, while KakaoPay delayed its debut after the watchdog’s intervention.

Most of the proceeds from the float, 35% of which is through secondary share sales, will be allocated to global M&A deals, the company said in its prospectus. It aims to become an entertainment company that offers content beyond gaming software, including animated movies and other entertainment contents that will form what it calls the “PUBG universe.”

“There might be a question mark whether Krafton can well create movies, short films or animation but we must expand into other various media products because that is what customers want and where the media environments are headed to,” Chang Byung-Gyu, the founder and chairman of Krafton, said at an online press briefing on Tuesday.