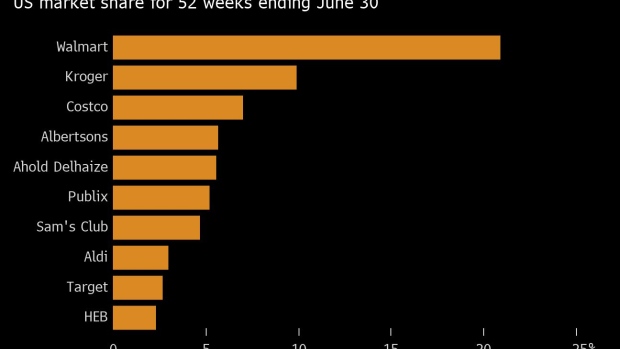 (Bloomberg) -- The top bosses at Kroger Co. and Albertsons Cos. are headed for a round of tough questions from US senators skeptical of their $24.6 billion deal to create a supermarket giant rivaling Walmart Inc. in heft.

Kroger Chief Executive Officer Rodney McMullen and his counterpart at Albertsons, Vivek Sankaran, will take on their critics Tuesday afternoon before the Senate Judiciary Committee’s antitrust panel. The appearance, scheduled for 3 p.m. in Washington, will be their highest-profile defense of the tie-up since they announced Oct. 14 that Kroger would buy Albertsons.

The hearing will refocus the spotlight on a deal that has sparked opposition from lawmakers, labor unions and consumer groups. Although Congress doesn’t have an official role in approving the combination, the Senate panel’s two leaders -- Minnesota Democrat Amy Klobuchar and Utah Republican Mike Lee -- have expressed “serious concerns” about the transaction’s effect on grocery competition. Other lawmakers have also expressed misgivings.

“While they can’t stop it, they can kick up the dust,” said David Bishop, partner at Brick Meets Click, which provides research on the US grocery and retail market.

The Federal Trade Commission is responsible for scrutinizing the merger’s antitrust implications and deciding whether it should be approved. Kroger and Albertsons, which have said they expect to close the deal in early 2024, are the two biggest traditional supermarket operators in the US.

In terms of where shoppers actually buy groceries, however, Kroger ranks second in market share after Walmart. Albertsons is fourth after Costco Wholesale Corp., according to Numerator, a market-research company that compiles consumer data.

The grocers say the deal would create economies of scale that would let them lower prices and boost investment in online offerings. Kroger, based in Cincinnati, operates chains such as Ralphs, King Soopers and Harris Teeter, in addition to its namesake stores. The banners of Boise, Idaho-based Albertsons include Safeway, Acme and Jewel-Osco.

Senators are likely to ask the CEOs about the stores they plan to get rid of, given the overlap between the two chains. In announcing the deal, the grocery giants said they would divest as many as 375 stores to win regulatory approval, although Kroger suggested in a federal filing that 650 was the upper limit. The companies operate a combined total of almost 5,000 stores. For comparison, Walmart has about 5,300 in the US, including its Sam’s Club warehouse locations.

Advisers of Kroger and Albertsons have started sounding out potential buyers to try to understand who might be interested in acquiring the overlapping grocery stores and at what price, according to a person familiar with the matter.

Kroger has received preliminary interest from both strategic and private-equity buyers but all conversations have been preliminary and no formal sales process has started, the person said, asking not to be identified while discussing confidential information. The grocers are still awaiting feedback from antitrust regulators about how many stores they might need to divest and in which regions, the person said.

In addition to selling locations, Kroger and Albertsons have said they could also spin them off into a new company. But the FTC under Chair Lina Khan has become increasingly skeptical of divestitures as a merger remedy. The agency typically has to approve any buyer of stores in a settlement agreement.

“We’ve seen time and time again that divestitures can be rife with risk,” she said at an October 21 conference. “If these divestitures fail, it’s the public that suffers and I think that’s something that we need to be weighing much more heavily.”

The agency in 2015 allowed Albertsons to buy Safeway Inc. on the condition that it divest 168 stores. Albertsons bought 33 stores back less than a year after the deal closed when the buyer went into bankruptcy, an outcome Khan called a “spectacular” failure in a 2017 law review article.

Another likely theme at the hearing is the deal’s impact on customers, suppliers and employees. The United Food and Commercial Workers International Union, which represents employees at Kroger and Albertsons, held a press conference in Washington on Tuesday, hours ahead of the Senate hearing, at which workers spoke against the deal and held up signs saying, “Stop the Merger.”

The effect on competition will be under particular scrutiny in states where Kroger and Albertsons overlap heavily, including parts of Illinois, Texas, Arizona, Nevada, Colorado and California.

The two California senators, Democrats Dianne Feinstein and Alex Padilla, raised concerns about the deal’s impact on food prices and the 99,000 employees at 900 Kroger and Albertsons’ grocery stores in the state.

There again, evidence from Albertsons’ Safeway deal will be important, said Joel Mitnick, an antitrust attorney from the law firm Cadwalader, Wickersham & Taft.

If prices rose faster than inflation in the Safeway stores that Albertsons acquired, the FTC would have good evidence to block the new Kroger-Albertsons merger, he said. But if food prices went down or were flat, the companies could argue that their increased size isn’t likely to harm competition.

Finally, senators are expected to question the CEOs about Albertsons’ plan to distribute a $4 billion special dividend to shareholders, the biggest of which is Cerberus Capital Management.

The payout had initially been scheduled for earlier this month, but a judge in Washington state ordered the company pause the plan while the merger with Kroger is under review.

A Washington state court hearing on the special dividend is scheduled for Dec. 9.