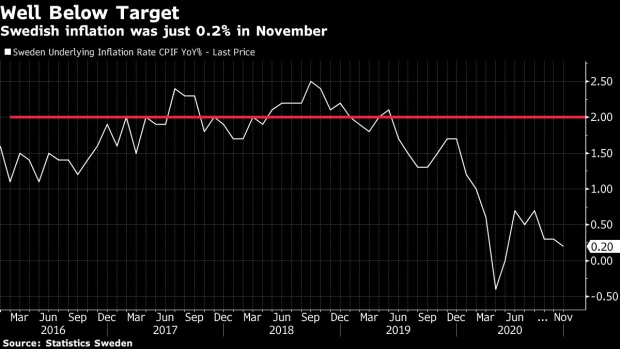 (Bloomberg) -- The Riksbank’s decision to revamp its foreign-reserve program has ignited bets that it may use the new set-up to cap the krona’s strength in an effort to revive inflation.

The best performer among major currencies last year, the krona sank as much as 1% against the euro on Wednesday after the Swedish central bank unveiled its new framework for maintaining foreign reserves. The bank plans to sell the equivalent of more than 1% of gross domestic product a year in kronor, as it phases out the foreign loans that have so far financed its reserves.

Anders Eklof, a strategist at Swedbank, says the move opens the door to speculation that the Riksbank will now use its “good pockets of liquidity to act.” That would enable the bank, “at least temporarily” to “slow krona rallies,” he said.

The Riksbank insists the move isn’t motivated by any monetary policy objective. It just wants to rely less on foreign borrowing, it says. But with inflation well below the bank’s 2% target, any step that caps the krona’s ascent will clearly help policy makers live up to their mandate.

Lars Henriksson, a strategist at Handelsbanken, says that “regardless of the official picture, it is difficult to depart from the fact that the decision comes very quickly at a stage when the Riksbank’s executive board has expressed concern about the rapidly rising krona exchange rate.”

The Riksbank abandoned negative rates more than a year ago, and has made clear it doesn’t want to go below zero again. Throughout the current economic crisis, Governor Stefan Ingves has voiced a clear preference for asset purchases over rate cuts. But there’s little sign so far that the approach is reviving inflation.

If krona strength were to become a “big issue” with regard to the inflation target, “you would have to think about that, but at this point I don’t see any reason to be concerned about the exchange rate from an inflation target perspective,” Skingsley said.

Eklof at Swedbank says the Riksbank’s new approach to maintaining foreign reserves, which is more in keeping with how other central bank’s manage their stocks, could simply “have a psychological effect” that keeps a lid on krona gains.

But others are more explicit.

Martin Enlund, chief analyst at Nordea in Stockholm, said that despite the Riksbank’s insistence that it’s new framework doesn’t have a monetary policy motive, “some might think this is another ‘power grab’ by a central bank possibly overstepping its mandates.”