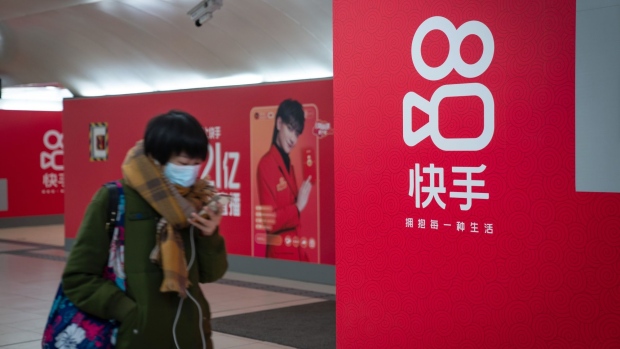 (Bloomberg) -- Kuaishou Technology plummeted almost 12% after an influential state-backed newspaper urged tighter regulation of internet video content, the latest in a string of pronouncements from government-controlled media calling for a crackdown on online industries.

The company slid to a low of HK$78.60 in Hong Kong, adding to Thursday’s 15% wipeout, after the Communist Party mouthpiece People’s Daily said in a commentary that Beijing should step up oversight of online platforms, particularly the way that anonymous social media users can band together to promote potentially undesirable content.

Kuaishou fell the most on record Thursday after a post-listing lockup on sales of its shares expired, underscoring the extent of investors’ fears about a widening Chinese online crackdown. Kuaishou joins rivals like Tencent Holdings Ltd. in a widespread market selloff this week, a wave of exits triggered by mounting uncertainty over the extent, direction and severity of Beijing’s widening clampdown on a plethora of online sectors.

Those actions demonstrated Beijing’s resolve to go after private enterprises to address social inequities, seize control of data it deems crucial to the economy and stability, and rein in powerful interests. Almost unnoticed amid a flurry of reports this week about gaming addiction was a Xinhua News Agency report outlining how regulators will soon step up oversight of how online media employ algorithms to promote content -- a key aspect of services operated by Kuaishou and ByteDance Ltd., among others.

Internet platforms should make efforts to promote a “healthy fan culture” among youths because insufficient oversight has encouraged improper activities, the People’s Daily wrote Friday. Some websites use algorithms and big data to create idols, then encourage fans to spend money, the newspaper said without naming any services.

(Updates with latest move from the first paragraph)