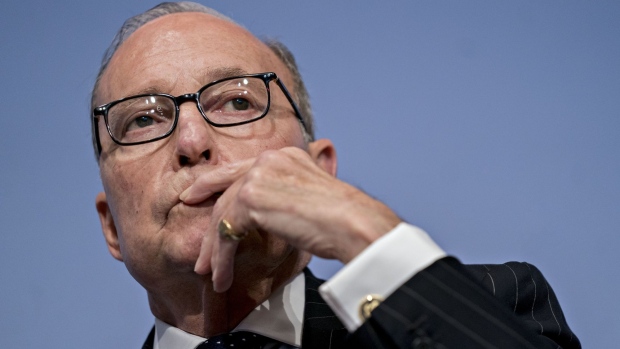 President Donald Trump’s top economic adviser, Larry Kudlow, said Monday he supports a proposal for the U.S. to sell “war bonds” to finance the fight against its coronavirus outbreak, an idea Treasury Secretary Steven Mnuchin has refrained from endorsing.

Kudlow told CNBC host Jim Cramer on Monday that he liked the broadcaster’s notion of a “covid war bond” and that he would present it to Trump. The government should consider “levers” that might be “unusual but timely and important means of federal finance” in a time of crisis, Kudlow said.

“I think it’s a great idea,” Kudlow told Cramer. “Obviously I’ve talked to our colleagues about this, whatever the maturity and the exact rate would be. This is a time, it seems to me, to sell bonds in order to raise money for the war effort, in this case the pandemic effort, in this case the effort to keep families and individuals and businesses afloat.

Whether the concept would have broader traction in the White House is unclear. Mnuchin didn’t directly answer a question about a potential “war bond” in a CNBC interview last week. Instead, the Treasury secretary said the government is focused on increasing liquidity by implementing the US$2.2 trillion stimulus measure Trump signed last month.

Mnuchin generally advocates the traditional Treasury position that bond issuance should be “regular and predictable.” But his department is again considering the issuance of ultra-long-term U.S. debt instruments to help finance the stimulus.

“This would be a long-term investment into the future of American health, safety and the economy, so from my standpoint, technical considerations aside, I think the concept is exactly right,” Kudlow said Monday.