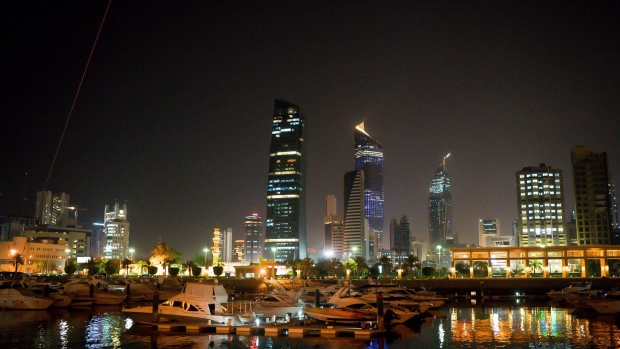 Motor boats sit at moorings in the Sharq marina at night in Kuwait City, Kuwait, on Monday, Aug. 14, 2017. Kuwait will issue a tender to build the estimated $1.2 billion Dibdibah solar-power plant in the first quarter of 2018 as part of the country’s plans to produce 15 percent of power from renewable energy by 2030. Photographer: Tasneem Alsultan/Bloomberg , Bloomberg

“All these initiatives are very important to the KIA, and we will be investing in those initiatives as long as at the end, it will be for the environment and benefit of the people” of future generations, Ghanem Al-Ghunaiman, managing director of Kuwait’s sovereign fund, said Tuesday at Saudi Arabia’s flagship investment conference.

Sovereign investors are starting to take environmental, social and governance principles more seriously despite criticism that they cling on to strategies that fail to acknowledge how rapidly the planet is overheating.

The Kuwaiti authority is a founding member of the One Planet Sovereign Wealth Fund Working Group established in Paris in 2017. The initiative’s mission is to work on integrating climate change risks and investing in the smooth transition to a low emissions economy.

The KIA, which is among the world’s biggest wealth funds, has previously invested in the initial public offering of Saudi Aramco. The fund isn’t known to invest widely in the region and has interests in ports, airports and power distribution globally.

Saudi Arabia has looked to reshape its reputation on environmental issues. The kingdom will establish a fund to improve carbon sequestration and back a plan to feed hundreds of millions of people by providing them clean cooking fuels, Crown Prince Mohammed bin Salman said on Monday.

The two initiatives will cost 39 billion riyals ($10.4 billion) and Saudi Arabia will contribute 15%. The government will also open regional centers for early warning of storms, for sustainable fishing and for cloud seeding. On Saturday, the prince pledged that Saudi Arabia would neutralize greenhouse gas emissions within its borders by 2060, which Kuwait said it fully supports.

Speaking at a panel discussion during the Future Investment Initiative, or FII, in Riyadh, Al-Ghunaiman didn’t specify which initiatives Kuwait’s wealth fund will support.

The goal is for the KIA to find ways to help reduce temperatures in the region, which are increasing annually, he said. The KIA manages Kuwait’s Future Generations Fund, which is designed to reduce dependence on oil-related investments.

“These initiatives are not an easy task, it’s going to take years and years to do, but at least let’s start, and put all our forces together and then we can reach our goals in the future,” Al-Ghunaiman said.