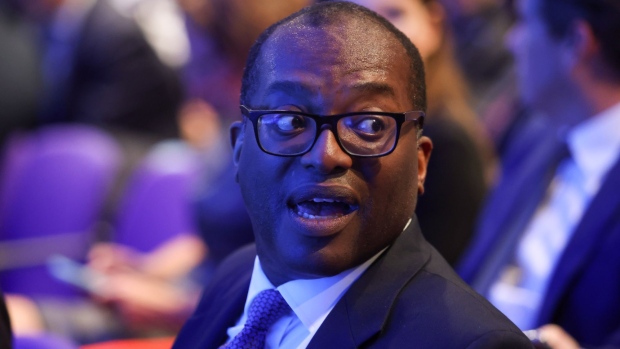 Kwasi Kwarteng, UK business secretary, attends the announcement of the winner of the Conservative Party leadership contest in London, UK, on Monday, Sept. 5, 2022. The UK will finally find out Boris Johnson’s successor as prime minister on Monday, after a bitter Conservative Party contest between Foreign Secretary Liz Truss and former Chancellor of the Exchequer Rishi Sunak. , Bloomberg

(Bloomberg) -- The UK government has an “absolute” commitment to both the Bank of England 2% inflation target and its independence, Chancellor of the Exchequer Kwasi Kwarteng told Governor Andrew Bailey in a letter on Thursday.

The pledge comes after Prime Minister Liz Truss suggested during her campaign to win the top job that she would look again at the bank’s mandate, raising speculation Kwarteng would seek to change the BOE’s marching orders from the government.

The chancellor -- in the job for just over two weeks -- also told Bailey that he enjoys his full support, adding “I know and expect that the MPC will continue to take the forceful action necessary” to rein in inflation.

The bank on Thursday delivered a second consecutive half-point interest-rate hike in its battle to bring down inflation, and lowered their forecast for peak inflation from more than 13% to less than 11%. The bank also said Truss’s plans to help households and businesses cope with the worst effects of soaring energy bills may help avert a deep recession.