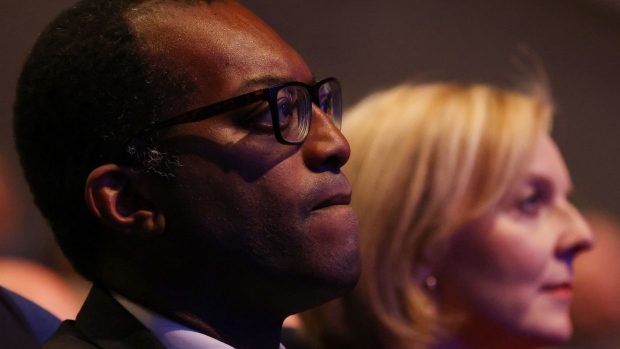 Kwasi Kwarteng, UK chancellor of the exchequer, left, and Liz Truss, UK prime minister, attend the Conservative Party's annual autumn conference in Birmingham, UK, on Sunday, Oct. 2, 2022. Truss acknowledged her UK government mishandled the announcement on unfunded tax cuts which triggered a week of turmoil in financial markets, while insisting her approach is the correct one. , Bloomberg

(Bloomberg) -- Kwasi Kwarteng is privately trying to reassure Conservative Members of Parliament that his tax cuts can fix the UK economy, in a bid to head off a potential rebellion.

The Chancellor of the Exchequer has talked to about 25 MPs in recent days, according to a person familiar with the matter, who said Kwarteng recognizes the scale of unease at his plans. At the same time, the chancellor is confident he will persuade the would-be rebels to back down, the person said.

The backlash over Kwarteng’s decision to scrap the top rate of income tax for the UK’s highest earners is threatening to fundamentally undermine Liz Truss’s government after less than a month in office. On Sunday, the prime minister took the unusual step of pinning the policy on Kwarteng, while saying she is sticking with it despite the seismic political fallout.

Her defiance -- as the ruling Conservative Party gathers in Birmingham for its annual conference -- fueled the anger among Tory MPs about the economic policy she and Kwarteng are pursuing and risks unsettling markets again when trading opens on Monday. Investors have been looking for a sign that Truss is ready to reconsider her plan for massive unfunded tax cuts after the government was effectively bailed out when the Bank of England stepped into the market last week to avert an imminent market crash.

Much of the Tory opposition stems from two fears: that the tax cuts will be funded by borrowing at a time the government is already increasing debt levels to help Britons with soaring energy bills; and that the reduction in the top rate of income tax looks like the government is prioritizing the wealthiest earners over those on lower incomes during a cost-of-living crisis.

Several said MPs are staying away from the Tory conference because they can’t support the tax cuts. One said instead they would spend the time responding to the hundreds of emails they had received from constituents concerned about surging mortgage costs and potential cuts to welfare payments.

Moments after Truss spoke on the BBC, former cabinet minister Michael Gove told the same program that removing the top rate of income tax for the highest earners was the wrong decision and indicated he would not support it. By late Sunday, he had become an unofficial recruiting sergeant for unhappy Tories, some of whom said they would be prepared to rebel against the plan.

At least 11 other MPs including Julian Lewis, Simon Hoare, James Cartlidge and Mel Stride, the Tory chairman of Parliament’s influential Treasury Committee, have so far gone public with their criticism of the tax cut. That indicates that the total could be significantly higher.

“Millionaires will gain by tens of thousands of pounds as a result of these tax cuts, and people on average and below average incomes will not,” Gove said later during a conference event. “That is the wrong priority.”

One problem facing would-be rebels is that because the full Budget is not expected until March, a vote on it in the House of Commons is likely to be months away. Yet the opposition Labour Party is expected to use parliamentary procedure to try to force a vote on the issue in the coming weeks.

One Conservative MP expressed hope that Kwarteng and Truss could be pressured into a U-turn on the tax due to the danger involved in losing a vote. Finance measures are regarded as a confidence issue for a government, and a defeat could embolden Labour to push for a general election.

But Truss reiterated Sunday she has no intention of backing down. And on Monday, Kwarteng will also use his keynote speech to say the government has no choice but to prioritize growth, and that tax cuts are a part of that.

“We will show that our plan is sound, credible,” Kwarteng will say, according to his office.“We must stay the course. I am confident our plan is the right one.”

Meanwhile party chairman Jake Berry issued a stark warning: Any Tory MP voting against the tax cut would be kicked out of the parliamentary party.

That prompted one Tory MP who won their seat in Boris Johnson’s landslide general election victory in 2019 to say they are trapped between a rock and hard place on the tax cut. Voting against the budget measure would likely see them deselected, yet the tax cut is so unpopular with voters that supporting the measure would probably cost them their seat anyway.

Amid days of market turmoil since Kwarteng made his fiscal statement, the pound plunged to a record low and support for the Tories has tanked, with YouGov putting the opposition Labour Party an extraordinary 33 points ahead. A survey by Opinium for the Observer newspaper showed three-quarters of UK voters, including 71% of those who backed the Tories in the last election, think Truss and Kwarteng have “lost control” of the economy.

Cutting taxes for the richest is politically toxic, especially as the government has made clear it is seeking ways to trim department to pay for the plans. Spending on public services was already cut back sharply when the Conservatives first won power 12 years ago during the global financial crisis, and National Health Service waiting times have soared since the pandemic.

For the Tories most angry about Truss’s economics, the issue is fast moving beyond voting down the specific measure in the House of Commons to removing the prime minister from office entirely -- less than three months since the last Tory prime minister, Boris Johnson, was himself forced to quit.

Their thinking reflects concerns about the reputation of Truss and Kwarteng as longstanding advocates of low taxes and deregulation, set out in a 2012 book, “Britannia Unchained.” They fear that cutting taxes for Britons highest earners is likely to be just the start and that it will leave the party out of step with most voters at a time when many families are seeing their budgets stretched.

Another MP, who asked not to be identified, said they are so concerned about Truss’s approach that they would be writing a letter to Conservative grandee Graham Brady to express no confidence in her as party leader. Though Truss is exempt from a leadership challenge for a year, the MP said the hope was that if there are enough other MPs doing the same, the rule could be changed.

Still, reaching the type of numbers that would force the hand of Brady, who heads the 1922 Committee of rank-and-file Conservatives which decides on leadership contests, is a tall order. How the conference goes this week will play a major part, but with so many MPs staying away, the real plotting may wait until Parliament returns next week.

Truss starts from a position of weakness in the party: Two-thirds of her MPs voted against her in the contest to replace Johnson in July, and she only claimed victory because she was the preferred choice of grassroots members.

Though unlikely, the prime minister does have options if the threat level rises dramatically. One is to backtrack on the top rate of tax and to jettison Kwarteng as political cover. Her comment Sunday that the decision to remove the highest levy was the chancellor’s alone raised eyebrows.

Former Conservative Chancellor of the Exchequer George Osborne told Channel 4 it is “touch and go whether the chancellor can survive” the fallout of his fiscal statement, adding that he should scrap his tax cuts and reassure voters and the markets during his speech to conference on Monday. “If that goes badly, it’s curtains,” Osborne said.