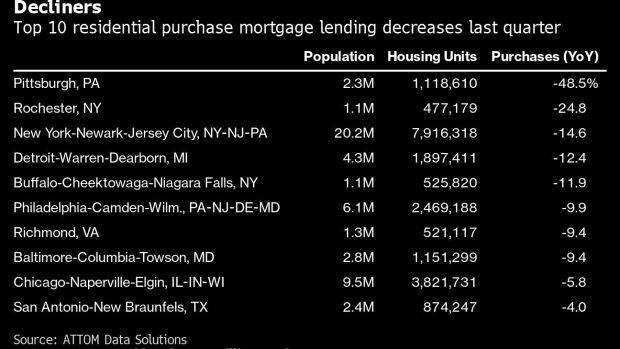 Home-buyers across California’s biggest cities have shown no let-up when it comes to betting on real estate. Photographer: Dania Maxwell/Bloomberg , Bloomberg

(Bloomberg) -- When it comes to L.A. real estate, “Sunset” is still selling -- even nine months into the pandemic.

With interest rates at some of their lowest levels ever, many renters are reassessing their housing options, said Jason Oppenheim, star of “Selling Sunset,” a Netflix reality series featuring a team of brokers and the glitzy properties they’re selling across Los Angeles.

“Let’s face it, the 1% are doing very well right now, with markets at all-time highs and interest rates extremely low,” said Oppenheim, who runs his Oppenheim Group brokerage along Sunset Boulevard, which the show’s built around. “Houses are affordable right now and people want to get out of their cramped apartments.”

Los Angeles isn’t alone. Since Covid-19 was declared a public health emergency in March, home-buyers across California’s biggest cities have shown no let-up when it comes to betting on real estate.

Along with Los Angeles, San Jose, San Diego, Sacramento and San Francisco were the U.S. markets with the biggest jump in new mortgages during the third quarter, according to research by ATTOM Data Solutions, which tracked metro areas nationwide with at least 1 million people. And that happened in the three months that saw a record increase in the number of residential purchase mortgage originations in the country.

“The housing market is still operating as if the recession brought on by the pandemic didn’t exist,” said Todd Teta, ATTOM’s chief product officer. “Buyers and owners, lured by low mortgage rates, kept lining up for loans at levels not seen in more than a decade.”

Along with renters, younger buyers are entering the market.

“The simple fact is that millions of well-qualified millennials are seriously shopping for houses, and they are competing for a shortfall of homes for sale,” said Jeff Tucker, senior economist at the real estate company Zillow.

Intense demand in a tight market has pushed month-over-month and quarterly home-value growth to levels not seen since 2005, according to Zillow.

The tight supply is reflected in many California markets, where “for sale” signs quickly disappear from front yards. Listings in Los Angeles were down 17.5% from a year ago for the week ending Nov. 14. In San Diego, they’re 33% lower, and listings dropped 37.2% in Sacramento. In Riverside, east of Los Angeles, they declined by almost half, Zillow’s data showed.

Some of the new buyers are going straight for high end after amassing fortunes from the technology boom. The tech-heavy Nasdaq Composite Index reached a record in the third quarter and is hovering near that level, while the S&P 500 Index hit a new high earlier in the week.

“Instagram, TikTok, YouTube, young people are killing it out here,” Oppenheim said. “I am selling a ton of $5 million to $10 million dollar homes to people on social media.”

Still, not all markets are outperforming, as job losses from the pandemic continue to weigh on consumer confidence elsewhere in the U.S. Teta at ATTOM cautioned that “the pandemic and other factors could come together and halt the market boom.”

Pittsburgh, Upstate New York’s Rochester and Buffalo, Detroit, and New York City are among the large metro areas that registered declines in mortgages from a year earlier.

Despite the mixed signals, Zillow anticipates 2021 will be the best year for home sales since 2006.

“People have zero apprehension about buying into this market,” said Oppenheim. “We’re probably going to see a few good years ahead of us.”