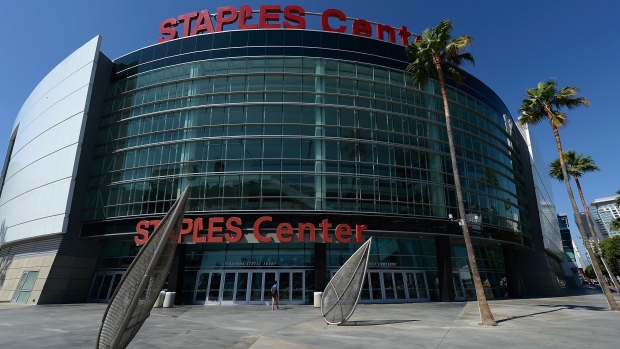 NBA star LeBron James and his teammates are getting a new name for their home court.

Crypto.com will replace Staples as the title sponsor of downtown Los Angeles’s iconic arena, the most recent high-profile sponsorship move by the Singapore-based cryptocurrency exchange. Owned and operated by Anschutz Entertainment Group, the venue will unveil its new name on Christmas day during a Los Angeles Lakers home game, according to a statement from the company.

“If I had to pick one place to have naming rights, it would be Staples Center,” in the world’s cultural capital, said Kris Marszalek, Crypto.com’s chief executive officer, in an interview. “This is in line with our ambition to be a top brand in the coming years, next to Nike and Apple.”

While the financial terms weren’t disclosed in the statement, two people familiar with the deal said it was worth more than US$700 million over the span of 20 years.

Crypto.com has aggressively pursued sponsorship in the sports world, backing teams and leagues across basketball, hockey, soccer, mixed martial arts and esports. The deals mirror a rising awareness around cryptocurrencies and blockchain technology and a desire by the leading brands to get themselves in front of a young, affluent audience that gravitates toward watching sports and playing video games. Outside of sports, the platform recently started a US$100 million global advertising campaign featuring actor Matt Damon.

The deal comes as investors and companies scramble to capitalize on the frenzy around cryptocurrencies and related technologies. At the same time, politicians are alternately promoting their crypto bona fides while remaining wary of the volatility and largely unregulated nature of the technology.

Cryptocurrency exchange FTX Trading Ltd replaced American Airlines Group this year as the sponsor for the arena that’s home to the Miami Heat basketball team, and it also re-branded the football field for the University of California at Berkeley’s Cal Golden Bears. Some of the biggest professional athletes are also investing in crypto, including football legend Tom Brady, who has an equity stake in FTX.

The soon-to-be-named Crypto.com Arena opened in 1999 as the Staples Center -- named after the office supplies retailer Staples Inc. -- and has been a centerpiece of an effort to revitalize downtown L.A. It’s home to the Lakers and the Clippers in the NBA, the WNBA’s Sparks and the NHL’s Kings. The 20,000-seat arena also plays host to awards ceremonies like the Grammys, as well as concerts, boxing matches and all-star games. All told, the arena hosts about 4 million visitors a year across more than 240 events.

“It’s the biggest of stages,” said Dan Beckerman, CEO of AEG,  in an interview. “We’re in the epicenter of the sports and entertainment world.”

The deal also gives Crypto.com about 3,300 square feet of space at the arena’s entrance to promote its brand, as well as a presence throughout the venue and at the adjacent L.A. Live entertainment complex, according to the statement.

After the Christmas unveiling, AEG will spend about six months swapping the arena’s external signage ahead of 2022-2023 seasons for the NBA, WNBA and NHL teams. The arena is also slated for use as a basketball venue when Los Angeles hosts the Olympics in 2028.

The arena and the L.A. teams join a growing list of Crypto.com’s sports-related partners. The Philadelphia 76ers, Montreal Canadiens, Italy’s Serie A soccer league, the F1 racing circuit and the Ultimate Fighting Championship all have deals with Crypto.com.

Cities are vying to demonstrate their enthusiasm for cryptocurrencies and related technologies to attract companies, jobs and residents. Newly elected New York City Mayor Eric Adams said he would take his first several paychecks in Bitcoin, and he’s engaged in a friendly competition with Miami Mayor Francis Suarez, who has emerged as a leading crypto cheerleader.