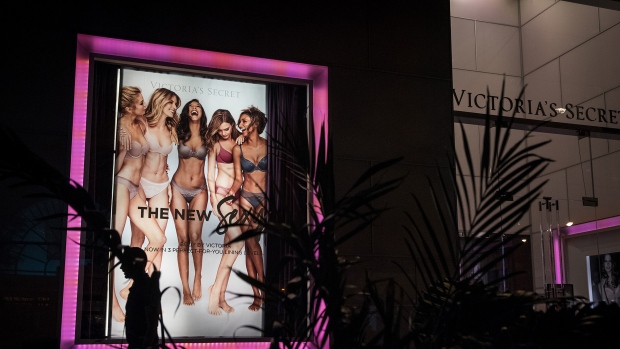 An illuminated advertisement is displayed outside a Victoria\'s Secret Stores LLC store, a subsidiary of L Brands Inc., at night in Chicago, Illinois, Aug. 7, 2017. Bloomberg/Christopher Dilts

L Brands Inc., the owner of Victoria’s Secret, has about three months left to resuscitate the struggling lingerie chain and placate an activist investor who’s called for a breakup and a board overhaul.

The company made some strides Wednesday, reporting better-than-expected sales growth at its Bath & Body Works unit. Its shares rallied but they’re still down about 34 per cent since the company announced an agreement to stave off the activist campaign by Barington Capital Group — a pact that’s up for renewal in late February, about the same time new board members can be nominated.

The activist hedge fund run by James Mitarotonda in March called for sweeping changes at the company, including a spinoff of Victoria’s Secret or an initial public offering of Bath & Body Works. While the company has implemented some of the changes the New York hedge fund called, the pace and the extent of the overhaul has fallen short of its demands.

Key changes have included Chief Marketing Officer Edward Razek stepping down and the hiring of transgender and plus-size models to address Barington’s complaints that Victoria’s Secret was becoming a dated brand and losing ground to smaller competitors such as Aerie‘s and ThirdLove Inc. The company also appointed two women directors.

On Thursday, L Brands confirmed that it canceled its annual fashion show, after the retailer said in May that it was rethinking the format.

Many of Barington’s demands for change, including splitting up the company, and others regarding the independence, experience and diversity of the board remain largely unmet since the truce was reached in March. Other changes have been slow. Same-store sales, a key metric in retail, have been negative for more than three years at Victoria’s Secret.

Representatives for L Brands and Barington declined to comment.

Barington’s stake in the company is less than one per cent. Les Wexner, the billionaire founder of L Brands, remains its largest shareholder with a 16% stake. Nevertheless, the standstill agreement shows that L Brands saw Barington’s demands as worth considering.

L Brands bought some time in April by granting Barington a role as special adviser to the company in exchange for the activist withdrawing its nominees for the board. Barington is subject to the standard standstill agreement, which includes a non-disparagement clause barring it from publicly criticizing the company.

Either side can opt out of the agreement in February. The nomination window for new directors opens around the same time and both are likely to precede the company’s fourth-quarter results. The terms of four directors are up at this year’s annual general meeting, including that of Raymond Zimmerman, 86, who has been on the board since 1984.

The other three are all members of the business community in Columbus, Ohio, where the company is based and have ties to Wexner and his wife, Abigail, who also sits on the board.

“It’s clear that the Victoria’s Secret turnaround plan is not working,” Jaime Katz, an analyst at Morningstar, said in an interview. “It seems like they are attempting to pivot to get closer to their customer, which is what they’ve been saying, but the numbers aren’t showing to support that.”

In September, John Mehas, who runs Victoria’s Secret Lingerie, laid out the unit’s plan to revive the brand at the retailer’s investor day.

The plan calls for a marketing strategy that’s more inclusive and upgrading the in-store experience, while making sure core customers don’t feel alienated. That day, some analysts still brought up the possibility of the brands being separated.

Katz said she believed that a separation of the brands was still top of mind for management, and said she would also like to hear about succession plans.

Wexner, 82, is the longest-serving CEO among Fortune 500 companies. His tenure dating back to 1963 at L Brands’s predecessor means he has a “knowledge base that’s going to be pretty much impossible to replicate” and makes it even more critical to have a succession plan in place, Katz said. Succession plans aren’t something the company has elaborated on much, she said.

“I would assume at some point he would want to spend more time with his family and less time with the business,” Katz said. “Maybe having an articulated succession plan would be helpful to understand what the direction of the business will be a decade from now.”