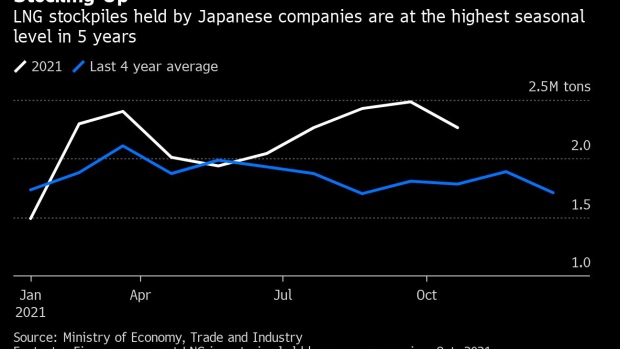 (Bloomberg) -- A weather phenomenon that typically delivers harsher winters is on the way and expected to add to Asia’s energy crisis.

The La Nina pattern, which forms when equatorial trade winds strengthen to bring colder, deep water up from the bottom of the sea, has emerged in the Pacific. That typically spells below-normal temperatures in the northern hemisphere and has prompted regional weather agencies to issue warnings about a frigid winter.

Several nations and particularly China, the top energy consumer, are grappling with surging fuel prices and for some, power shortages or curbs on supply to heavy industry. Coal and gas prices are already elevated and a bitter winter will add heating demand that’ll likely spur further gains.

“We are expecting temperatures to be colder than normal this winter across northeastern Asia,” said Renny Vandewege, a vice president of weather operations at data provider DTN. “Weather forecast data is a critical component of predicting how much energy load will be required.”

Here’s the outlook for some key nations:

Temperatures plunged early last week across most of eastern China, and are already colder than usual in some northern areas, according to the country’s National Climate Center. Provinces including Heilongjiang, Shaanxi and Shanxi began the winter heating season between four and 13 days earlier than in previous years. Local government-controlled systems -- typically powered by coal or gas -- are fired up to warm residents’ homes in many areas.Extreme weather conditions could happen more regularly as a result of global warming, according to Zhi Xiefei, atmospheric science professor at Nanjing University of Information Science & Technology. “Cold waves could lead to greater temperature drops, but unusual warm events could also appear,” Zhi said.

Japan will likely see lower than normal temperatures next month, according to the Japan Meteorological Agency, which had earlier forecast a 60% chance of a La Nina over the autumn-winter period. The nation, which has been relatively insulated from the energy crisis, is staying vigilant after last year’s deep freeze that saw wholesale power prices spike.

Utilities were caught without enough fuel as demand surged last winter, forcing them to buy costly spot liquefied natural gas shipments. The trade ministry has already been meeting with major power, gas and oil firms to prepare for the winter months, and LNG stockpiles held by Japan’s major electricity providers are currently about 24% above the four-year average.

South Korea will see colder weather in the first half of winter, and is also likely to be impacted by the effects of La Nina, according to the country’s meteorological administration. The country saw its first snow of the season 15 days earlier than last year amid an unusually cold October.

Temperatures in India are expected to fall to as low as 3 degrees Celsius (37 Fahrenheit) in some northern areas in January and February before recovering. Unlike in other nations, cooler weather typically leads to lower energy consumption as demand for air conditioning wanes.

Most importantly, the nation is anticipating a drier period after the end of the monsoon season. Key coal mining regions suffered flooding in recent months that triggered a squeeze on supply of the fuel used to produce about 70% of the nation’s electricity.

Aside from La Nina events, there are other factors that can impact the region’s winter weather, according to Todd Crawford, director of meteorology at Atmospheric G2. Climate change has led to a lack of sea ice in the Arctic’s Kara Sea, which may be contributing to high pressure ridging in that area. This leads to downstream colder conditions across northeast Asia, “like what happened last winter,” he said.

There are also indications the polar vortex – a girdle of winds that bottle up cold at the pole – could be weaker than normal at the start of winter, which would allow frigid air to spill south, Crawford said.

“Putting all that together, we think the best window for big cold in northeast Asia this winter is in the late November to mid-January window,” he said. “That is where we think the greatest risk lies.”