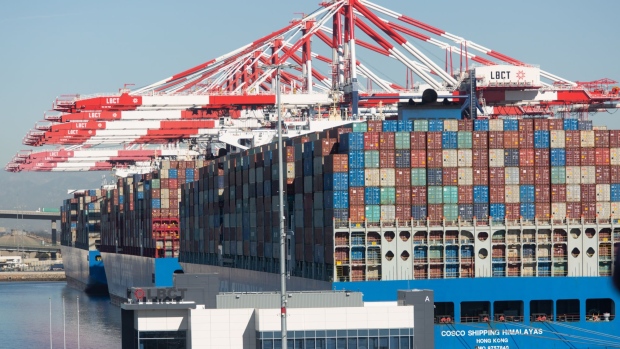 (Bloomberg) -- The head of the US’s busiest port said he doesn’t foresee strikes at about 30 West Coast maritime hubs even as the labor contract for 22,000 dockworkers is about to lapse on Friday without a new deal.

“Anything’s possible but it will not happen,” Port of Los Angeles Executive Director Gene Seroka said about the potential for a strike in an interview on Bloomberg Television Wednesday. The port is giving the union and employers “as much room as they need to negotiate and the rest of us are just moving all this cargo through the nation’s largest gateway.”

Negotiations between the International Longshore and Warehouse Union and about 70 employers represented by the Pacific Maritime Association started in May and will likely go past the July 1 expiration date, both parties said in a joint statement earlier this month. Although the expiry would set workers and their employers free to engage in stoppages, they also reaffirmed neither side is preparing for a strike or lockout.

The labor talks take place as the US recovers from an unprecedented supply-chain crisis sparked by the Covid-19 pandemic. At stake in the negotiations is no less than the recovery of the world’s biggest economy, already dealing with the most pernicious inflation in four decades, shortages of products ranging from baby formula to air-conditioner parts, and growing fears that another shock could tilt the country into a recession.

The negotiations are also happening amid an influx of cargo as retailers stock up on back-to-school and holiday goods and as the nation’s largest port deals with bottlenecks across the board. Railroads and warehouses remain clogged and truck gates are going unused.

The port continues to work with Union Pacific Corp. and BNSF Railway Co. around the clock to address the backlog of rail-cargo containers, Seroka said, noting that more than one-third of boxes arriving at the hub will be transported into the country by rail.

He added the port must also work to shorten turnaround times for truckers.

“We’re keeping our pulse to the market to make sure that we’re catering to this all-important truckers segment,” Seroka said. “On average during the week, we’re working 19 hours a day, day- and night-side shifts. Many of our marine terminals have introduced flex hours, opening a little earlier, making sure lunch time has work happening, and closing a little bit later.”

Seroka is expecting bookings from Asia to remain strong, and while some retailers are already looking at high inventory levels, he expects different categories of goods to arrive in the US in the second half of the year, including fall fashion and retail holiday-season products. “The June numbers will rival our best June ever set just last year, and we’re matching, box for box, our record-setting 2021,” he said.

“Second-quarter numbers economically should look pretty good,” Seroka said, but added that the US may have a “bumpy landing.”

(Updates with comments from Seroka in sixth paragraph.)