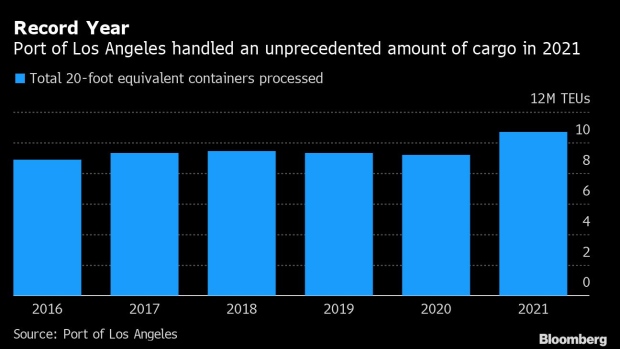 (Bloomberg) -- The Port of Los Angeles moved record cargo volumes last year amid an import surge at the U.S.’s biggest container gateway and supply-chain snarls brought on by the pandemic.

“We learned how much cargo we could move through our port under extraordinary circumstances,” Seroka said in a virtual event Thursday. While routinely breaking monthly records, port workers have faced longer hours and bottlenecks on and offshore.

U.S. supply chains have strained under unprecedented demand, worker and truck-chassis shortages and a shift to buying more material goods as Americans avoided travel and social outings over the course of the pandemic.

Los Angeles and Long Beach received record inbound shipments in 2021 and despite efforts by the ports and the Biden administration, delays continue at two operations, which handle about 40% of the U.S.’s inbound containers.

The recently passed bipartisan infrastructure law contains $17 billion for ports and inland waterways, and the U.S. Army announced plans on Wednesday to invest more than $14 billion for upgrades to shore up against threats from climate change.

Earlier this month, Governor Gavin Newsom designated $2.3 billion in the California budget that would go toward addressing the shortage of commercial truckers and increasing capacity on railroads and other ports improvements.

Seroka said dollars for the Los Angeles port would go toward enhancing digital and cyber-security infrastructure as well as for freight improvements. The investments will also help develop zero-emissions port-drayage systems and workforce training, he said.