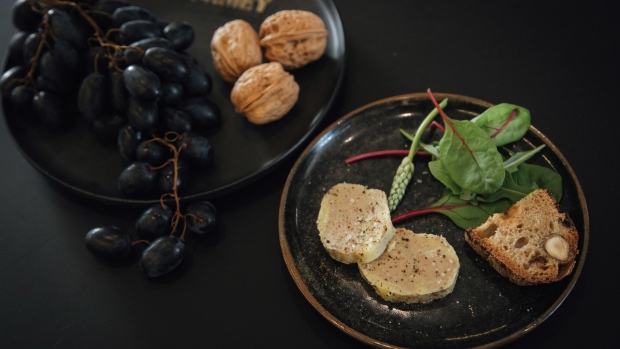 (Bloomberg) -- Gourmey, the French cultivated-meat startup, has secured funding to build a 46,000-square-foot plant in Paris to produce lab-grown foie gras as producers warn about a potential shortage of the delicacy this Christmas.

The company has raised 48 million euros ($48 million) for the new building, which will house commercial production and research and development operations, Gourmey said in a statement on Wednesday.

“We are getting to the production and commercialization stage,” co-founder Nicolas Morin-Forest said in an interview. The main obstacle for Gourmey’s foie gras, which is grown from duck cells but doesn’t involve fattening and slaughtering ducks, is that the product still needs regulatory approval before it can be sold in stores, he said.

Lab-grown foie gras could one day provide an alternative to the farmed product, which has been hit by regular bouts of bird flu in recent years, forcing farmers to cull their flocks and leading to shortages. Producers have warned that there could be too little farmed foie gras to meet demand during the crucial Christmas season, with 30% to 40% fewer ducks coming from French producers this year, according to a report from Le Figaro newspaper.

The industry has also grappled with ethical concerns about the way the ducks are treated, force fed several times a day until their livers swell, which has led to bans in some countries.

Morin-Forest said he expects the first cultured-meat products to be allowed to go on sale in the US in the next few months with authorization in Asian countries to follow. Europe may take longer because of the continent’s tighter regulations, he said.

Gourmey has said it’s collaborating with chefs and plans to eventually introduce its product into high-end restaurants.

The new Paris facility will be Europe’s largest cultivated meat hub, with construction set to take between 18 months and two years. It should allow a planned annual production capacity of tens of thousands of pounds of high-quality cultivated meats, Gourmey said.

The funding round will come from new investors led by Earlybird Venture Capital, with backing from Keen Venture Partners and Instacart Chief Executive Officer Fidji Simo, Gourmey said in the statement. Former investors are following, including Heartcore Capital, Point Nine Capital and Partech.

With 40 employees currently, Gourmey plans to triple staff to 120 in the next two years, Morin-Forest said. The startup has raised 56 million euros in financing to date, including the new funds.

(Updates with plans to introduce product to restaurants in seventh paragraph. The company corrected the size of its facility in a previous version.)