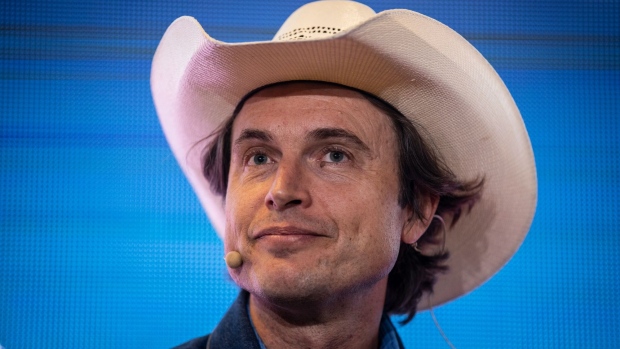 Kimbal Musk, founder of Big Green, speaks during ETHDenver in Denver, Colorado, U.S., on Friday, Feb. 18, 2022. ETHDenver is the largest Web3 #BUIDLathon in the world for Ethereum and other blockchain protocol enthusiasts, designers and developers. , Bloomberg

(Bloomberg) -- Kimbal Musk, whose more famous billionaire brother’s anti-union sentiment is well known, has landed in his own showdown with a US labor regulator.

Musk’s nonprofit educational gardening company, Big Green, responded to a union drive by first making threats and then terminating all 10 workers the union was trying to represent, according to a National Labor Relations Board complaint.

The labor board voted Monday seek a court injunction against the company over the dispute.

Big Green has denied wrongdoing and alleged that labor board officials “continuously abused the process” in prosecuting the case against it. “I think the labor board just likes the Musk name,” Musk said Monday.

Labor board prosecutors said the company was illegally retaliating when it stopped employing workers to set up and support “learning gardens,” pivoting to instead providing grants and support for organizations such as schools to establish gardens themselves.

Musk said the company decided to shift its model before becoming aware of union activity and said the labor board is “coming after us for all the wrong reasons.”

The union that was organizing at Big Green welcomed the agency’s action. “We were exercising our legal right to amplify our voices at work by organizing a union, and instead of respecting that right they fired my co-workers,” former employee Evan Davis said in an emailed statement from the Communications Workers of America. “I’m glad the NLRB is defending our legal right to unionize because the work that we did was vital to our local communities and we deserved a voice in the workplace.”

US labor law prohibits companies from retaliating against workers for taking collective action to improve their working conditions, including union organizing. But the labor board, which prosecutes alleged violations of that law, has no authority to make companies pay punitive damages, and disputes over alleged retaliatory terminations can drag on for years, hampering organizing efforts even if the fired workers ultimately prevail.

The labor board’s general counsel, Joe Biden appointee Jennifer Abruzzo, has pledged to “aggressively” seek federal court injunctions to get fired activists back on the job more quickly, and recently obtained one for seven workers fired by Starbucks Corp. in Memphis. Starbucks has denied wrongdoing.

He serves on the board of Tesla Inc., where his brother Elon is chief executive officer. In a ruling last year, the NLRB members found that an anti-union tweet by Elon Musk and the company’s firing of a union activist violated the law; the automaker is appealing in federal court.

(Updates with comment from company and union starting in fourth paragraph)