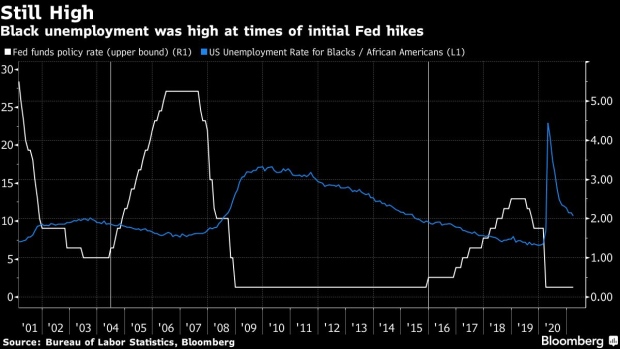 Richard Trumka, president of the American Federation of Labor & Congress of Industrial Organizations (AFL-CIO), speaks during the American Federation of Government Employees (AFGE) Legislative and Grassroots Mobilization Conference in Washington, D.C., U.S., on Monday, Feb. 10, 2020. President Donald Trump released his annual budget Monday, proposing deep cuts to social programs but increases in defense and entitlement spending that would push the gross federal debt above $30 trillion over the next decade. , Bloomberg

(Bloomberg) -- AFL-CIO president Richard Trumka called on President Joe Biden to use a current vacancy on the Federal Reserve’s Board of Governors to bring greater diversity to the central bank.

Trumka said in an interview Thursday that union officials have recommended the White House nominate William Spriggs or Lisa Cook for the Fed board seat. Either of them would bring the voice of “working Americans” to the world’s most powerful central bank, he said.

“The sooner that a worker’s voice is heard in the inner workings of the Federal Reserve, the better for the economy itself and the better for average working Americans,” Trumka said.

Spriggs is currently chief economist at the AFL-CIO and teaches at Howard University. He served as an assistant secretary in the Obama administration’s Labor Department.

Biden’s nomination would be subject to Senate confirmation.

Both economists enjoy support in Biden’s White House. If nominated and confirmed, Cook would be the first-ever Black woman to sit on the Fed board. Spriggs would be only the fourth Black man on the central bank’s board in its century-plus history. Neither Cook nor Spriggs immediately responded to requests for comment. The White House also didn’t immediately have a comment.

The pandemic crisis has highlighted long-standing disparities across the U.S. economy, a major focus for Biden and his top advisers. The unemployment rate for Black workers, who have a disproportionate share of lower-wage jobs and union membership, was double that of their White counterparts during much of the past 50 years -- in part because the Fed has historically tightened monetary policy just as the benefits of economic growth began to reach lower-income workers.

Trumka also complimented Fed Chair Jerome Powell, whose term at the central bank’s helm expires in February. Later this year, Biden will need to decide whether he wants to reappoint or replace him.

Powell has “done a really masterful job so far of steering the economy with workers in mind and not the same old cliches about bondholders -- they’re going to be all right no matter what,” Trumka said, while declining to say whether he supported Powell’s reappointment.

Labor unions have attained significant influence across Biden’s administration, finding themselves with a voice on many policy decisions, and their support could help Powell win reappointment.

The unions have strong ties to Yellen, a labor economist expected to be involved in interviewing Fed candidates, and to her deputy, Wally Adeyemo, along with officials on the Council of Economic Advisers and others at the White House.

Biden has the opportunity to put his own stamp on the Fed and its priorities. Decisions loom on four Fed board positions in the coming year, including the chair. Powell has indicated he’s open to reappointment.

“We want the Federal Reserve to understand that it has two jobs, not just one. Not just fighting inflation, but the second job: Achieve full employment,” Trumka said.

Trumka also said that Biden should maintain some of former President Donald Trump’s tariffs on Chinese imports, but that he should pursue a multilateral strategy with allies instead of continuing Trump’s go-it-alone approach.

“The best idea is to pick on a product, like steel and aluminum,” he said. “Those are justified against China and should be maintained -- they’re cheating.”