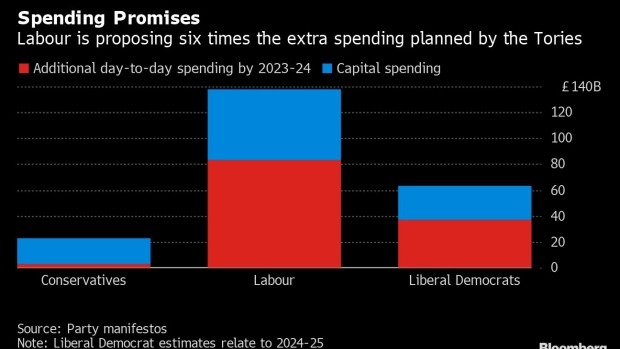 Scaffolding surrounds the clock face on the Elizabeth Tower, also known as Big Ben, at the Houses of Parliament in London, U.K., on Monday, Nov. 4, 2019. When Parliament dissolves on Wednesday, it will mark the official start of the general election campaign. Photographer: Jason Alden/Bloomberg , Bloomberg

(Bloomberg) -- Britain’s upcoming election has revived a political and economic debate that many considered to have been won decades ago -- whether nationalization works.

The opposition Labour Party has pledged to bring rail, water, energy distribution, the postal service and -- in an announcement last month that shocked investors -- BT Group Plc’s broadband network under public control. The aim is to reverse much of privatization wave unleashed by Margaret Thatcher’s Conservative government in the 1980s.

While opinion polls suggest Labour is unlikely to win the Dec. 12 vote, which is largely focused on Brexit, they also show the public tend to agree with party leader Jeremy Corbyn. They see poor rail service despite rapidly rising fares, slow internet speeds and limited access in remote areas, and the shambolic performance of the Royal Mail after it was sold to the private sector.

Moreover, it isn’t obvious that the U.K. has better service in these areas than other European countries with higher public ownership.

“It’s important to take a step back and recognize how unusual the U.K. is,” said Laurie Macfarlane at the UCL Institute for Innovation and Public Purpose. Industries like water and mail in public hands is “absolutely standard in a northern European social democracy.”

Corbyn’s plans have, however, been seized on by Prime Minister Boris Johnson’s ruling Conservatives as an example of Labour’s unsuitability for government. They’ve also prompted howls of dismay from business groups and free-market advocates who may have thought the argument long settled.

“Nationalized industries are not just extremely expensive, but will provide an extremely bad quality service to its customers,” said Matthew Lesh, head of research at the Adam Smith Institute. “They don’t get the investment they need from government to keep them up to date.”

Much of the discourse during the election campaign has focused on the cost of Corbyn’s plans, rather than their economic viability.

The Confederation of British Industry estimates an “eye-watering” price tag of almost 200 billion pounds ($258 billion), which has been countered by a 50 billion-pound figure from the University of Greenwich.

The second study, which put the difference down to basing its calculation on “compensating shareholders the exact money they invested, rather than paying ‘market values’,” also said the cost would be recouped within seven years thanks to the 7.8 billion pounds of savings it would bring.

Some point out that low borrowing costs are a reason why now might be a good time to pursue the policy and that the state will receive valuable assets in return.

To people on both sides of the debate, though, the relentless discussion of costs misses the point. What matters, they say, is whichever system best serves the economy.

“This should not be based on ideology,” said John Weeks of the Department of Development Studies, SOAS, and author of The Debt Delusion. “It should be based on whether the private sector can carry the activity out more effectively than the public sector.”

That approach reflects the fundamental theory behind nationalization, that the government should own industries that are natural monopolies, such as rail or power lines where side-by-side competition doesn’t make sense. The idea is to protect consumers by keeping prices down or ensuring that the profits from public goods accrue to taxpayers instead of shareholders.

The Labour Party’s constitution called for common ownership of industry for much of the 20th Century, until Tony Blair altered the famous Clause IV provision in 1995.

Speaking to the CBI conference last month, Corbyn focused on the benefits to consumers, saying the U.K. had “been failed by rip-off energy bills and poor rail” services. On Monday, the party said it would cut fares by 33% under a publicly owned rail system.

Advocates of public control point to Scottish Water, a rare example of a still-nationalized operator in the industry and the most trusted utility company in the U.K., according to the We Own It lobby group. Meanwhile, European rail and Danish wind power are also cited as evidence of effective nationalized industries.

Moves away from nationalization haven’t been universally successful. A privatization of the prison probation service this decade was quickly reversed, while railways have been beset by increasing customer dissatisfaction, with one contract forced to be taken back into public hands.

Tony Lodge, a rail expert, research fellow at the Center of Policy Studies and former Conservative adviser, holds government policy responsible. He advocates a purer implementation of privatization, opening up routes to multiple operators to allow for greater competition, and says that renationalization would be a “disaster.”

Opponents of nationalization also warn that public control could sap investment, and that such companies could become subsumed to political rather than customer-oriented goals. Bringing industries back into public hands would inevitably be complex, throwing up a myriad of negotiations over what compensation shareholders would receive.

Academic debate has also centered around the relative efficiency of both systems. A 2001 review of studies of privatization, published in the Journal of Economic Literature, found it tended to work because “firms become more efficient, more profitable, and financially healthier.”

However, a 2014 study by David Hall, who also carried out the University of Greenwich research, concluded there is “no empirical evidence that the private sector is intrinsically more efficient.”

Either way, public support for nationalization remains high. A 2017 YouGov survey showed 65% wanted the Royal Mail to be taken into public hands, with support around 60% for rail and water. That means the issue will probably live on regardless of how well Labour does in next week’s election.

“A simple reinvention of old nationalized industries might be good politics but it is poor economics,” Vince Cable, a Liberal Democrat who served as business secretary in the the Conservative-led coalition government between 2010 and 2015, wrote in the Independent last month. “It will cost a great deal and achieve very little.”

To contact the editors responsible for this story: Paul Gordon at pgordon6@bloomberg.net, ;Fergal O'Brien at fobrien@bloomberg.net, Brian Swint, Andrew Atkinson