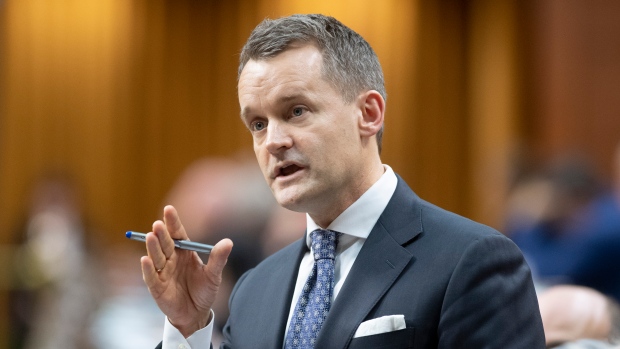 Natural Resources Minister Seamus O'Regan responds to a question during Question Period in the House of Commons in Ottawa on February 17, 2020 , THE CANADIAN PRESS/Adrian Wyld

OTTAWA -- Labour Minister Seamus O'Regan says he plans to put paid sick leave on the agenda for a meeting with his provincial and territorial counterparts to resolve a patchwork system of policies and workplace culture that may dissuade workers from staying home when ill.

In late December, Parliament gave its approval to create 10 days of paid sick leave for federally regulated workers, who make up less than one-tenth of all workers in Canada.

Work on the actual regulations is set to begin in early March with invites to consultations set to go out Friday, just as O'Regan is scheduled to meet with his provincial and territorial counterparts.

O'Regan is being urged by one of the country's largest labour organizations to push provincial and territorial governments toward replicating the federal policy.

In an interview, O'Regan said he plans to listen to what his counterparts have to say on how such a policy could work in their jurisdiction, but also potential price tags for governments and employers.

But in making a public call for O'Regan and other labour ministers to create more paid sick days for workers who don't already have them as part of their contracts, the Canadian Labour Congress also noted another problem with the nascent federal policy.

The organization's president, Bea Bruske, in a statement said some provincial programs were underused by non-unionized staff, which was chalked up to pressure from employers.

O'Regan said he's looking to get the federal policy enacted as quickly as possible, but noted it may take longer for workers to take the time, and employers to push for it, instead of toughing it out when sick.

"Therein lies the rub," he said on the eve of the meeting. "How do you have certain standards in place and the mechanics in place, but at the same time allow some degree of flexibility?"

Finding that balance is something O'Regan identified in several areas he's been tasked to deal with by Prime Minister Justin Trudeau, including a federal policy on what's known as the "right to disconnect."

The concept is one that the government considered even before the pandemic to provide guidelines about how workers can digitally untether themselves from the workplace after hours, rather than always being connected to work emails and messages.

O'Regan's predecessor was warned in the summer of an entrenched split between employer and labour groups who advised the government on the elements of policy.

While the government sorts out its next steps, O'Regan suggested employers and workers may want to talk about an issue that the minister said has been exacerbated by the pandemic as more Canadians work remotely.

"It's an initial good first step to encourage employers and employees to start talking in the workplace about a right to disconnect that may work for your workplace," he said. "And at some point, the government is going to have to come in, because we said we would, on a policy, but I think we're all suffering this."

That strain on workers is something O'Regan is also expected to discuss during Friday's meeting as the Liberal government looks to add mental health to workplace safety regulations in the federal labour code.