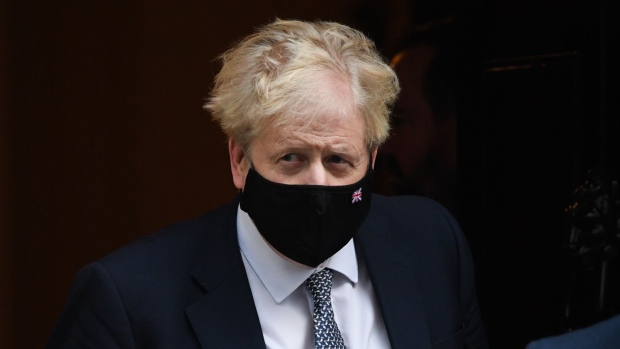 (Bloomberg) -- As Boris Johnson battles to save his political career over the so-called partygate allegations, the opposition Labour Party may have revealed where it sees its best chance of bringing him down.

During an otherwise relatively benign -- by recent standards -- session of Prime Minister’s Questions on Wednesday, Labour leader Keir Starmer zeroed in on two statements made last month by Johnson that he said showed the prime minister had misled the House of Commons -- regarded as a resigning offense under the ministerial code.

“Will he now resign?” Starmer asked.

While Johnson rebuffed Starmer and multiple Labour lawmakers who spoke later, their attack line illustrates the danger he faces. Some Conservative MPs have said they will wait for a government report into allegations of rule-breaking parties in Downing Street in the pandemic before deciding if they still back his leadership.

The Partygate Scandal: What Boris Johnson Has Said So Far

The question of whether Johnson has misled Parliament over the allegations looms large. As the reports have multiplied, his words to the chamber in December are coming under ever more scrutiny.

“All guidance was followed completely in Number 10,” Johnson replied to Starmer on Dec. 1. A week later, he said: “I have been repeatedly assured since these allegations emerged that there was no party and that no Covid rules were broken.”

Johnson has since said he attended a drinks reception in his Downing Street garden in May 2020, though he insisted he thought it was a “work” gathering. Then this week, his office confirmed Johnson and his staff also gathered to celebrate the premier’s birthday in June 2020. A senior civil servant, Sue Gray, is investigating if those events and more than a dozen others were parties and therefore rule-breaking.

For his critics, Johnson’s presence at the two gatherings casts his statements to the Commons in an entirely different light. The police began their own inquiry on Tuesday, though it’s not clear which events are subject to the probe.

On Wednesday, Starmer got Johnson to acknowledge in a roundabout way that if he was found to have knowingly misled the House of Commons, he should resign. That remains unlikely, regardless of what the government probe, and a separate police inquiry, conclude on the Downing Street events.

Tory MPs will make their own decision about whether to bring Johnson down. But Starmer’s line of attack shows he will try to make it an unavoidable one.