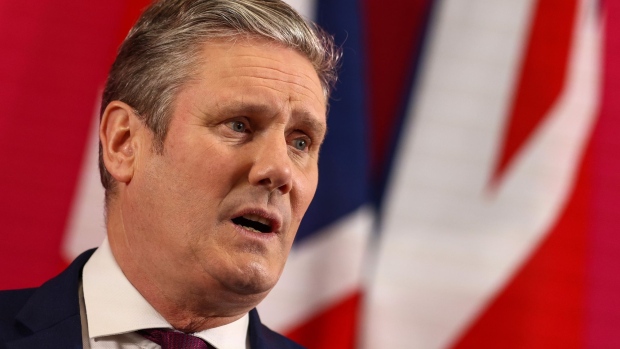 Keir Starmer, leader of the Labour Party, delivers a keynote speech on "Security, Prosperity and Respect" in Birmingham, U.K., on Tuesday, Jan. 4, 2022. The U.K.'s ruling Conservatives are 16 percentage points behind the opposition Labour Party in the “red wall” of traditionally Labour-voting constituencies in northern England the Tories flipped at the last election. , Bloomberg

(Bloomberg) -- For Boris Johnson’s main political rival Keir Starmer -- dubbed “Mr. Rules” by his allies  -- it was inconceivable that a lawbreaking premier could stay in office. That looks like a miscalculation, some analysts say.

London’s Metropolitan Police concluded its inquiry into the so-called partygate allegations without issuing further fines against Johnson for the rule-breaking gatherings held in Downing Street during the pandemic.

That left him with the one he received for his birthday party, which prompted some Conservatives to call for his resignation. Johnson refused, and the Tory rebels never gained the numbers to force a leadership vote.

Thursday’s announcement has left Johnson in a stronger position, removing a potential rallying cry for his Tory critics. But it has also significantly dented the political strategy of Starmer and his opposition Labour Party.

Labour’s relentless focus on Johnson’s lawbreaking was meant to make his position untenable, by undermining his support both within the Conservative Party and among voters. Though it has worked to a degree -- the Tories shed hundreds of seats in local elections and trail Labour in national polls -- the impact has not been enough to persuade Johnson’s party to oust him.

Instead, it is now Starmer who risks losing his job, after he pledged to resign if police in northern England fine him over allegations that a beer and curry gathering while campaigning last year also broke pandemic rules.

Police initially cleared Starmer and his team of wrongdoing, but took a second look at the event under intense pressure from Tory lawmakers and Conservative-leaning newspapers.

Starmer’s different approach arguably reflects his background as a former director of public prosecutions. But according to analysts including Joe Twyman, co-founder of public opinion consultancy Deltapoll, it also represents a misreading of voters and how Johnson has built his strength.

U.K. Labour’s Starmer to Resign If Fined Over Pandemic Curry

“After seeing the impact Boris Johnson playing by his own rules had on some parts of the electorate, Keir Starmer attempted to play a different game -- based on his own strengths -- in the hope that the public would be receptive,” Twyman said in an interview. “Unfortunately for Starmer, a fine from the police could completely upturn that game.”

According to Twyman’s research, when asked what personal attributes are important for a prime minister, 92% of British adults say “honesty.” The problem, he said, is that only works in theory.

“In practice, when given the options available, many are still willing to support those they know can be dishonest,” he said.

Johnson has long defied political norms, frustrating his opponents by surviving missteps and scandals that would typically be expected to sink a career. His various nicknames in Westminster include “Teflon” and “the greased piglet.”

Tim Bale, professor of politics at Queen Mary, University of London, said “it feels like Labour overshot when they didn’t focus their attacks on Johnson lying to Parliament, but instead focused on him breaking the law.”

The prime minister has repeatedly denied misleading Parliament over “partygate,” a position that will now be tested by a committee of lawmakers now that the police have concluded their probe.

“Starmer is working on playing on the fundamental decency of the British people,” Bale said. “Johnson has always appealed to their fondness for a lovable rogue.”