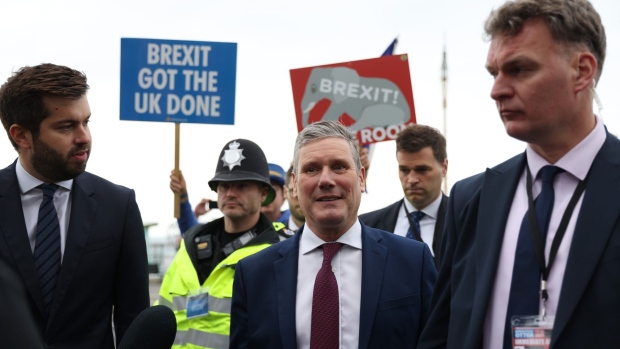 (Bloomberg) -- U.K.’s Labour Party leader Keir Starmer said he’s against nationalizing energy companies, a retreat from a pledge during his leadership campaign, as Britons face a surge in electricity prices, long petrol lines and a “winter of discontent.”

Starmer said “No” when asked on the BBC if he would pursue such a course of action if he became prime minister.

“When it comes to common ownership, I’m pragmatic about this. I do not agree with the argument that says we must be ideological,” Starmer told the “Andrew Marr Show” on Sunday.

The statement is in sharp contrast to Labour’s support for renationalizing the nation’s power and natural gas network, which was a central part of the party’s agenda under its previous chief Jeremy Corbyn.

During his leadership campaign last year, Starmer had said “public services should be in public hands, rather than making profits for shareholders. Support common ownership of rail, mail, energy and water.”

He offered a modified view on Sunday. “Well, public services should be in public hands, but when it comes to something like energy we’ve got an immediate problem in the next few months that we’ve got to solve,” he said.

Starmer was interviewed from the Labour Party’s gathering in Brighton, where he’ll give a keynote speech on Wednesday.