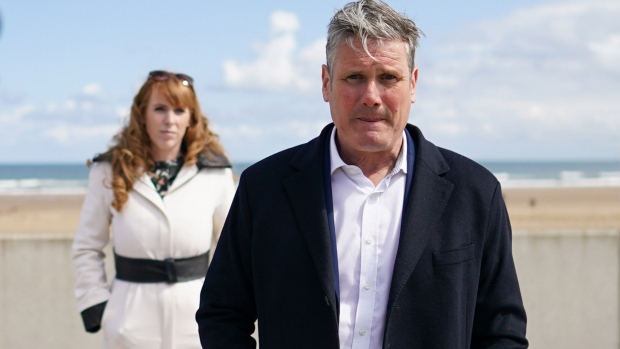 SEATON CAREW, UNITED KINGDOM - MAY 01: Labour Party leader Sir Keir Starmer and Angela Rayner, Deputy Leader and Chair of the Labour Party visit Seaton Carew seafront on May 01, 2021 in Seaton Carew, United Kingdom. The leader and deputy leader of the Labour Party are campaigning in County Durham ahead of the local elections and a by-election in Hartlepool, which both take place on May 6. (Photo by Ian Forsyth/Getty Images) , Photographer: Ian Forsyth/Getty Images Europe

(Bloomberg) -- Labour Party leader Keir Starmer is expected to reshuffle his team of ministers-in-waiting, following disastrous election results that saw the U.K.’s main opposition lose key battlegrounds to Boris Johnson’s ruling Conservatives, according to a person familiar with the matter.

Tory successes in the “Super Thursday” elections, in particular taking the parliamentary seat of Hartlepool in Labour’s former heartlands, have plunged Starmer into crisis mode. On Saturday, he removed his deputy, Angela Rayner, from her job as party chair and election chief.

But that moved triggered a backlash among senior Labour politicians, and on Sunday, Ian Murray told Sky News Rayner hadn’t been fired but instead promoted. She would have a voter-facing role, Murray said, without defining it.

It adds to the sense of chaos engulfing Labour following the elections, which Labour had hoped would serve as a bellwether for the nation’s mood over the government’s widely criticized handling of the pandemic -- until the vaccine rollout changed the picture in recent weeks.

In addition to Hartlepool, Labour lost key races in the West Midlands and northern districts, all former so-called Red Wall seats that were typically loyal to the party. Starmer called the results “bitterly disappointing.”

Rayner’s supporters argue she’s a perfect example of the sort of working class, northern English communities that the party needs to to start to win back support in these areas.

Andy Burnham, who was re-elected in a landslide as Greater Manchester Mayor and who said he might stand for Labour leader “one day,” didn’t hide his feelings on Rayner’s treatment.