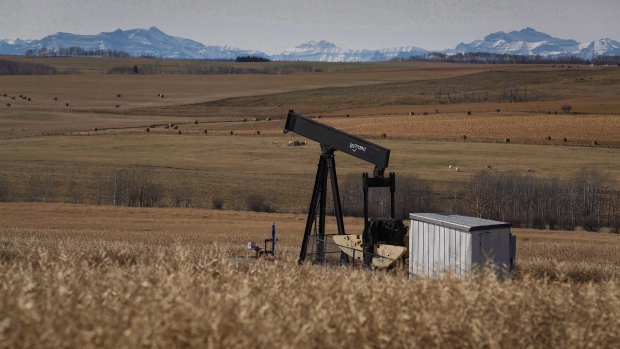 A de-commissioned pumpjack is shown at a well head on an oil and gas installation near Cremona, Alta., Saturday, Oct. 29, 2016. The number of orphan wells in British Columbia has more than doubled thanks to the failure of one oil and gas company. THE CANADIAN PRESS/Jeff McIntosh

CALGARY -- Alberta's efforts to clean up tens of thousands of inactive oil and gas wells in the province could be delayed by a shortage of rig workers.

Mark Scholz, chief executive of the Canadian Association of Energy Contractors (CAOEC), said cleanup efforts will “face pressure'' due to a significant labour shortage in the drilling and services sector. Many of the same companies that provide rigs to oil and gas companies for new drilling programs are also involved in industry cleanup efforts, and hire the same workers for both types of contracts.

“Whether it's for new programs or abandonment operations, we're all going to be faced with crew shortages. So will (cleanup) be impacted? Yeah, it will,'' Scholz said.

Alberta has an estimated 97,000 inactive wells, as well as 73,500 wells that have been sealed and taken out of service but not yet fully remediated, according to provincial government figures.

The oil and gas industry has been under increasing pressure from environmentalists and landowner groups to clean up these sites and reclaim the land they sit on. Last year, the Alberta government announced it would require companies to spend a minimum amount of money every year ($422-million in 2021) toward cleanup of inactive wells.

The federal government has also made $1-billion available to Alberta for industry contractors working on well cleanup.

The government programs, in addition to trying to accelerate remediation of inactive sites, were also borne out of a desire to create jobs for unemployed rig workers at the outset of the pandemic. Oil prices crashed in early 2020 and many rigs were idled, throwing more than 6,000 people employed in the drilling and services sector out of work, according to PetroLMI, an industry labour market information provider and a division of EnergySafe Canada.

However, the situation is dramatically different than it was a year ago. Oil and gas companies in Western Canada are once again ramping up production - this time to meet rising global energy demand as COVID-19 restrictions ease around the world.

Industry statistics show there were 175 active drilling rigs in Canada last week, compared to just 75 in the same period last year and 155 in 2019. That means there's a lot more work to be had: according to PetroLMI, the unemployment rate in Alberta's oil and gas services sector fell from 18.1 per cent in September 2020 to 3.4 per cent in September 2021.

PetroLMI vice-president Carol Howes said her organization recently conducted a survey of drilling companies and found that a lot of those that historically worked in the traditional oil and gas sector broadened their scope in 2020 to work in the area of well closure and cleanup. She said for some companies, those cleanup contracts kept them from going under.

“We heard that time and time again as we interviewed and discussed this with companies - that it (cleanup activity) kept them alive until things started to turn around again,'' she said.

Daryl Bennett, an Alberta farmer who sits on the board of the Action Surface Rights Association - which helps landowners navigate dealings with the energy sector - said he is worried that increased activity in the oilpatch will mean fewer drilling companies will want to bid on well closure and reclamation projects.

“I imagine a lot (of companies) will switch over, and there won't be as much cleanup work being done,'' Bennett said.

In an email, Alberta Energy spokeswoman Jennifer Henshaw acknowledged that increased demand for labour may cause short-term planning challenges and delays getting abandonment and reclamation work started.

But Henshaw said increased labour demand is a sign of Alberta's economic recovery, and good news in the long run.

“There is no doubt that higher oil and gas prices have led to increased drilling activity, which can attract more workers and increase industry's ability to fulfill their environmental liability obligations,'' she said.

Henshaw said the Alberta government is in talks with the province's energy sector to ensure that staffing needs are met “to support the industry's critical role in Alberta's economic recovery as well as accelerated well cleanup.''