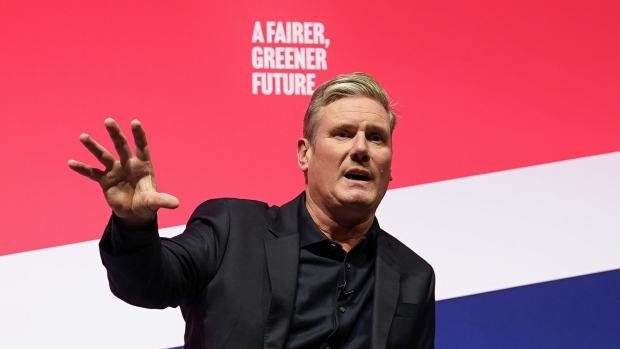 The UK Labour Party surged to a record poll lead over Prime Minister Liz Truss’s Conservatives amid a selloff in the pound that followed the ruling party’s fiscal giveaway on Friday.

Some 45% of adults said they’d vote Labour, compared to 28% opting for the Tories, according to the YouGov poll for the Times newspaper. The 17-point lead is the biggest ever recorded for Labour by the pollster in the more than two decades it’s been conducting surveys.

It’s the first verdict from the voters over Chancellor of the Exchequer Kwasi Kwarteng’s fiscal package on Friday, the biggest tax giveaway in half a century. That sent the pound crashing -- it touched an all-time low against the dollar on Monday -- while gilts also suffered a selloff amid market concerns that the government’s strategy will stoke inflation and raise the national debt.

Truss’s three week-old administration has been blown off course by the financial and political backlash to Kwarteng’s strategy, unnerving Tory MPs, many of whom fear the country is headed for a fresh economic crisis. It’s also buoyed delegates at the Labour Party’s annual conference in Liverpool this week.

In his keynote speech on Tuesday, leader Keir Starmer will seek to position Labour as the party of fiscal responsibility, saying they stand for “sound money,” according to pre-briefed excerpts of his speech. He’ll also commit to drawing up a long-term growth plan involving less borrowing than Truss’s economic strategy.

Conducted for the Times newspaper, the latest YouGov survey was of 1,730 adults between Sept. 23 and Sept. 25. Its previous poll, carried out before Kwarteng’s fiscal intervention, gave Labour an eight-point lead.

Efforts by both the Treasury and Bank of England to calm market nerves failed late on Monday as their twin statements fueled a renewed selloff in UK assets. The Treasury said it will publish a medium-term fiscal plan on Nov. 23, alongside a forecast by the government’s budgetary watchdog, while the BOE said it won’t hesitate to change interest rates “by as much as needed” to hit its 2% inflation target.