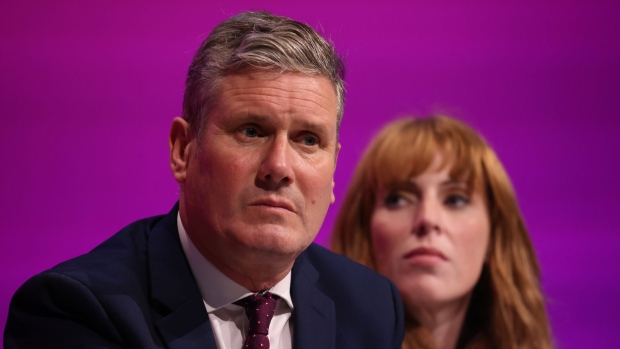 Keir Starmer, leader of the U.K. opposition Labour party, during a plenary session at the annual Labour Party conference in Brighton, U.K., on Sunday, Sept. 26, 2021. U.K.'s opposition party leader Keir Starmer is hosting his first major in-person gathering since he was elected leader in April 2020. , Bloomberg

Finance spokeswoman Rachel Reeves will unveil the plans to Labour’s conference on Monday, including a promise to ensure bricks-and-mortar stores and services aren’t at a disadvantage to online companies. The party would ditch so-called business rates and replace them with another system.

“We will look at every single tax break,” Reeves will say, according to advanced excerpts of her speech. “If it doesn’t deliver for the taxpayer or for the economy then we will scrap it. Labour will tax fairly, spend wisely, and get our economy firing on all cylinders.”

While the overall aim is to repair relations with business, the proposals also include the scrapping of tax relief for private schools as the Labour leadership tries to keep the more socialist wing of the party on board.

Under leader Keir Starmer, Labour is seeking to reinvent itself and turn the party into a viable alternative for government as the British electorate faces a tough few months with labor shortages, soaring energy costs and hospitals struggling to cope with a backlog because of the pandemic.

Yet the party also wants to show it’s pro free market. On Sunday, Starmer ruled out public ownership of energy companies as the rising price of gas pushes some suppliers out of business. Starmer’s predecessor, Jeremy Corbyn, pledged to nationalize swathes of industry including the railways, postal service and utilities.

The pledge to overhaul business rates would answer a longstanding demand from industry groups that argue the tax penalizes retailers and services with physical outlets and favors companies trading on the Internet and those with large out-of-town depots. Johnson’s Conservative government is already reviewing the system, with an outcome due in coming weeks.

The proposals were welcomed by the country’s biggest business lobby. “The Labour Party should be applauded for grasping the nettle and putting forward a pro-growth, pro-investment package of reforms,” said Tony Danker, director general of the Confederation of British Industry.

Reeves, a former Bank of England economist, will pledge to look at the more than 1,000 tax breaks currently that cost 174 billion pounds ($238 billion) a year. Some provide loopholes that should be closed, while others create complexity that businesses have to navigate, she will say.

One is the so-called carried interest loophole, which allows private equity fund managers to pay a reduced rate of tax on their bonuses. The party estimates that scrapping that would raise an annual 440 million pounds.

Starmer got a boost on Sunday when Labour members backed key reforms he promised would widen the party’s appeal. The changes require his successors to get support from more members of Parliament to run for the leadership. He was forced to drop a wider plan to replace the “one-member-one-vote” system that saw Corbyn win in 2015.