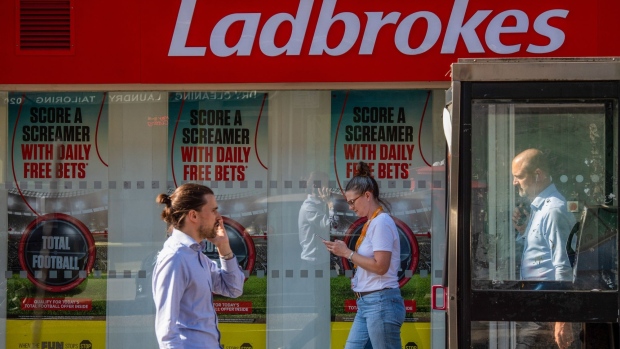 A Ladbrokes betting shop, operated by Entain Plc, in London, U.K., on Wednesday, Sept. 22, 2021. Entain shares jumped after DraftKings Inc. offered to acquire the U.K. gambling company for about $22.4 billion, as a surge in sports betting helps drive deal activity across the industry. , Bloomberg

(Bloomberg) -- Ladbrokes owner Entain Plc has been ordered to pay a £17 million ($20.6 million) fine after failing to enforce player safety and anti-money-laundering measures, and has been warned it could lose its UK gambling license if it happens again.

It’s the largest settlement that the UK Gambling Commission has ever demanded, a commission spokesman said Wednesday, though it represents a small percentage of Entain’s £3.9 billion in annual revenue.

In one instance, Entain’s Coral brand blocked a customer who’d spent £60,000 in 12 months without sharing the source of the funding, only to have the customer immediately open an account and deposit £30,000 with its Ladbrokes brand, the commission said in a statement.

It’s the second time the company has breached the rules, and “further serious breaches will make the removal of their license to operate a very real possibility,” Gambling Commission Chief Executive Officer Andrew Rhodes said in the statement. The UK is starting to tighten the regulatory environment for these companies, and has plans to overhaul the rules gambling businesses must follow.

About £14 million will be paid for failures at the group’s online business and £3 million for problems at its brick-and-mortar division as part of the settlement, the regulator said.

An Entain spokesman said it entered into the settlement to bring the matter to a close and avoid protracted legal proceedings. It highlighted the Gambling Commission’s statement that “it found no evidence whatsoever of criminal spend within Entain’s operations.”